Larruso according to our gatherings has been admitted at the hospital after he was knocked down by a motorcycle during his new music video shoot in Fadama.

As sighted in the video making rounds on social media, the young Ghanaian dancehall artiste was standing in front of the 4 tyre bike when unfortunately the rider lost control and mistakenly drove over him.

Larusso was about starting his video shoot when the 4 tyre motorcycle ran over him thereby breaking his left leg and hand whiles on the floor screaming for help.

We are told that some equipment being used for the video shoot was also reportedly damaged beyond repairs.

The ‘Killy Killy’ hitmaker took to social media a few moments ago to update fans about his condition. He posted a photo of him bandage wrapped around his hand. 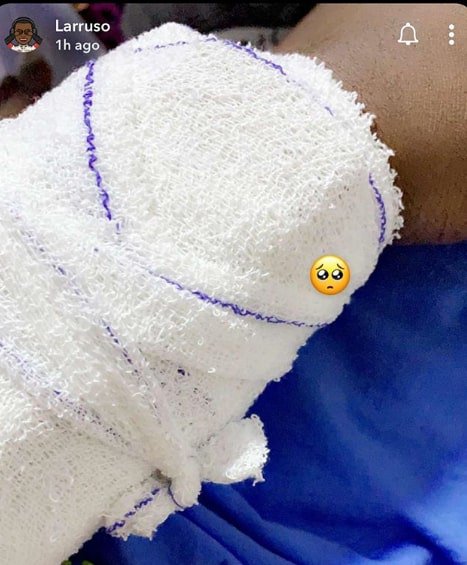 Larusso’s manager, Jadon Shatter explained that his artiste is gradually responding to treatment. The young sensational dancehall act is progressively making a name for himself in the Ghanaian Music Industry.

He became well known by all thereupon his collaboration with Stonebwoy and Kwesi Arthur on the ‘Killy Killy’ remix.

YOU MAY ALSO LIKE  [Video Premiere] Naira Marley – “Puta”

The post Larusso hit by motorcycle while shooting a new music video appeared first on illuminaija.