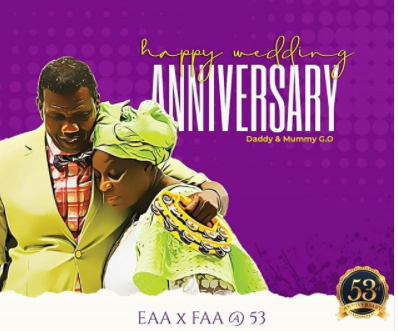 Leke Adboye, son of clergyman, Pastor Enoch Adeboye, general overseer of the Redeemed Christian Church of God RCCG, has thrown shade at people who have opinions on marriages despite failing in their own marriage.

Leke threw the shade while celebrating his parents on their 53rd wedding anniversary on Tuesday, September 8.

Posting the photo above, Leke wrote

”53yrs o. And someone will now think they can talk. When they didn’t even make it past reception.”

Pastor Adeboye has over the years been bashed on social media over his comments on marriage.

The post Leke Adeboye shades people whose marriages didn’t last yet have an opinion on marriage as he celebrates his parents 53rd wedding anniversary appeared first on illuminaija.