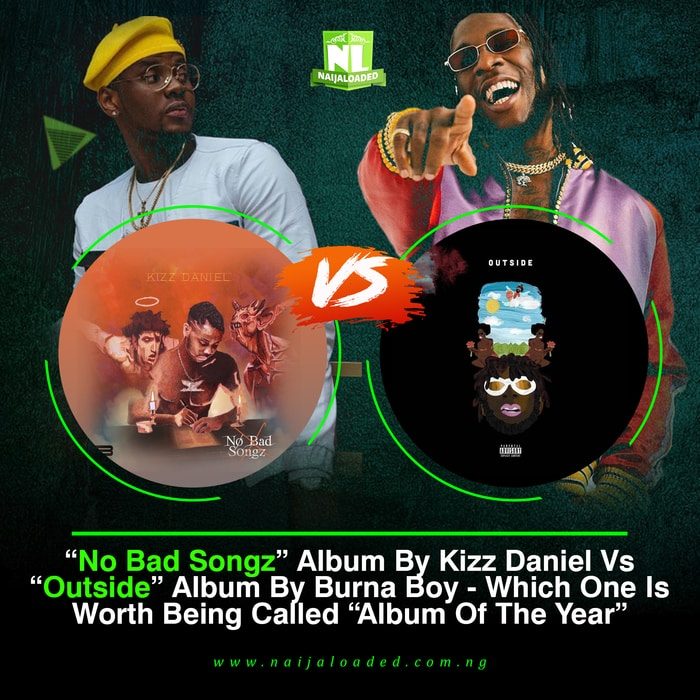 Still basking in the euphoria of about time to witness another amazing award night organized by the No.1 music award show in Nigeria, The Headies, we should then discuss this “Album Of The Year” category.

Out of the 23 award categories by the heads award, the “Album Of The Year” is always the most talked-about category, after the controversial “Next Rated” Category and that of “Artiste Of The Year”.

According to the Headies 2019 organizers, these 4 albums down-listed are the albums that meet the basic requirements of excellence (songwriting, production, rendition, and impact).

See the Albums below:-

Kudos to the Headies on this sublime shortlisting of Albums out of all discographies that were released in the year under review (January 2018 – June 2019). But out of the 4 albums shortlisted, 2 actually stand out as the best contenders in this category.

Using more stringent requirements, we shortlisted, “No Bad Songs” by Kizz Daniel and “Outside” by Burna Boy.

CONSIDERING “OUTSIDE” BY BURNA BOY

On the Basis rendition, International acceptance and diaspora general acknowledgment we can say “Outside” by Burna Boy. is the favorite contending album out of all the nominated albums.

Without being sentimental, I don’t think any other album holds a candle beside “Outside” Album.

However, Using a yardstick of Songwriting, production and like they local acceptance of an Album, then I give it up to “No Bad Songs” album by Kizz Daniel. With that album, Kizz Daniel got a score of indeed an artiste without a Bad song yet.

That’s like the album, I believe virtually every music lover can sing along to all tracks on it word for word, every track on it was a reflection of a very good lyricism, indeed a no bad songs album.

Perhaps, it’s going to be a very tough rivalry between both artistes with the albums that has more edge of winning the award in that category.

YOU MAY ALSO LIKE  247Politics: N1.61bn diverted by Dariye meant for reclamation – Witness

The post LET’S TALK!!! “No Bad Songz” Album By Kizz Daniel Vs “Outside” Album By Burna Boy – Which One Is Worth Being Called “Album Of The Year”? appeared first on Naijaloaded | Nigeria’s Most Visited Music & Entertainment Website.