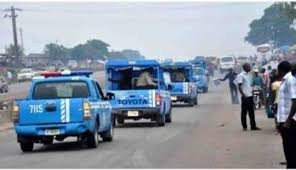 A 25-year-old man identified as Hamisu Tukur has been arrested by police officers in the Bwari Police Division in the Federal Capital Territory (FCT) command for allegedly stealing a vehicle that belongs to the Federal Road Safety Corps(FRSC) Headquarters at Wuse Zone 5, Abuja.

A statement released by the FCT Police Command Public Relations Officer, DSP Anjuguri Manzah, says the suspect was arrested during a stop and search operation following a distress call by the FRSC.

“In a prompt response to a distress call received by the FCT Police Command’s control room, the Command on 5th September 2020 arrested one Hamisu Tukur ‘m’ 25years at the outskirt of Bwari, for stealing a vehicle belonging to the Federal Road Safety Corps(FRSC) Headquarters stationed at SkyMemorial, Wuse Zone 5.

“The fleeing suspect was arrested by the eagle-eyed Police Operatives from Bwari Division during a stop and search operation, following call received from the FRSC Headquarters by the Command’s control room.

“The exhibits recovered from the suspect are one (1) white Toyota Hilux-HQ-26RS and a single key.”

The spokesperson said the suspect will be arraigned in court upon the conclusion of the investigation.

YOU MAY ALSO LIKE  Wawu! FG To Turn National Stadium To Wembley Standard – Sports Minister