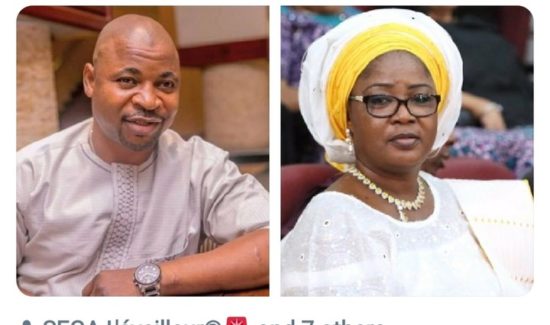 The Chairman of the Lagos State branch of the National Union of Road Transport Workers (NURTW), Alhaji Musliu Akinsanya ( MC Oluomo) has made the 20-man list for the selection of beneficiaries for the Federal Government’s 774,000 jobs across all the Local Governments in the country.

The initiative, which is being handled by the Federal Ministry of Labour and Employment is targeted at providing jobs for 774,000 citizens across the 774 local governments in the country.

The jobs are basically unskilled labour, with a monthly wage of N20,000.
The Lagos State selection committee is chaired by Alhaji Mutiu Are, a member of the Lagos State Governor’s Advisory Council, and the former Kosofe Local Government, Vice Chairman, Barrister Kasim Kayode Eleshin (K.K Eleshin) as the Vice-Chairman.

YOU MAY ALSO LIKE  “I’m blessed and highly favored from God” – Alaafin of Oyo’s wife, Aanu celebrates her birthday

The committee also includes the Iyaloja of Lagos, Mrs Folashadr Tinubu-Ojo, some traditional rulers, leaders of trade and labour associations as well as other stakeholders in Lagos.

Of recent, there have been whispers on the alleged involvement of the Lagos oligarchy in the re-branding of MC Oluomo in a bid to present him for political office in 2023.

YOU MAY ALSO LIKE  MAD OO!! NDLEA Arrests Man For Allegedly Selling Marijuana In Its Lagos Office