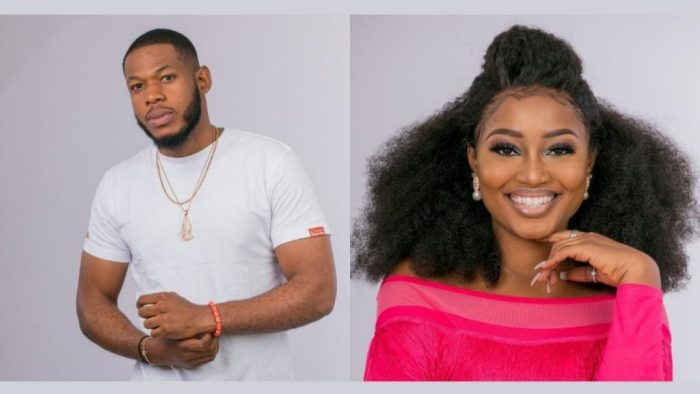 Big Brother Naija housemates, Khafi and Gedoni were again caught having sex on Wednesday night in the BBNaija house.

The BBNaija love ‘birds’ were seen having sex this time around before light out while others were awake.

This caused reactions from fellow housemate, Esther who felt irritated by their actions.

In a short viral video, Esther could be seen frowning her face while peeping at Khafi and Gedoni having sex. Also, Frodd had a glimpse of the couple having sex under the duvet.

The viral video of Esther’s reaction and constant sex from Khafi and Gedoni has since stirred reactions from BBNaija fans online.

Here are some comments gathered by 9jaupdate247 from Twitter;

@Onos_147 “Khafi and Gedoni went under the sheets again while Esther and Frodd were watching with lights on, Khadoni really needs to stop ‘tormenting’ other housemates. Have your sex when lights off.”

YOU MAY ALSO LIKE  Santa In Abuja! Wizkid Steps Out In Style With Tiwa Savage For His Concert

@Osee80 ” It’s as if Khafi and Gedoni came to have sex in BBNaija even with lights on. Meanwhile, that look on Esther’s face when she saw them.lol.”

@Demo_uk “Esther be like wt*? Frodd be like God when. That’s just the irony of life. Khafi and Gedoni need to calm down, you all are on live tv!

@Robertolafr “Esther still surprised about what’s going on, is she just experiencing sex for the first time?

@Marykalu “They are enjoying themselves, did you see anything. At least it was under the duvet. Let them be.”

@Same1 “Meself don tire for Khafi, Gedoni sex, at least one of them should receive sense.”

@naijainteractiv “The look on Esther’s face is legendary. She’s like What is wrong with these people?

YOU MAY ALSO LIKE  Davido Fires At His Music Industry Haters, Tells Them “To Suck His D*ck”

@Bonanaija “Esther and Frodd perplexed by Khafi and Gedoni romance.”

@Sandrajasmin15 ” Esther is amazed at Khafi after everything, she still sheepishly went back to that Gedoni guy.”

@Nonhlanhla “That look on Esther’s face, Baby girl was not ready.”

Haven’t seen the video yet?