Juliet Ibrahim says 2020 has tested her mental health. This is her personal appraisal after often been the subject of social media trolls for her failed relationships.

The Ghanaian actress, film producer is counted among the few celebrities whose comments and issues on social media transcended to other parts of the world.

Reminiscing to some her news that made headlines. Her divorce to Kwadwo Safo Jnr, the CEO of the Kantanka Group of Companies in 2010. The marriage lasted for four years.

In 2018, the actress announced her relationship with Nigerian rapper, Iceberg Slim live on radio.

Their relationship was a perfect description of a match made in heaven as they wore matching outfits and tattoos. The two flaunted each other on social media.

But it lasted for only a few months. The relationship hit the rocks and the actress became the subject of trolls again. She and the rapper unfollowed deleted pictures of each other on social media.

A few weeks ago, the actress shared a picture of herself and a Nigeria television presenter, VJ Adams, sparking another wave speculation that the two were seeing each other.

Having dealt with all these in just a year, she has come to the conclusion of adjudging this year-2020 as the only year that has tested her mental health.

Thus looking at all these and trolls she had to face it would have been better for her to have gone completely deranged due to the dent it had on her brand and status in the society.

In a post on her official page on Instagram, Juliet Ibrahim of Lebanese, Ghanaian and Liberian descent shared a beautiful picture of herself with the caption; “My mental health was tested this year like no other…” 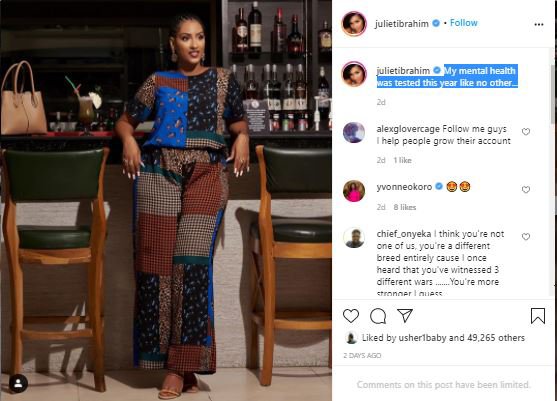 The post My mental health was tested this year(2020) like no other – Juliet Ibrahim appeared first on illuminaija.