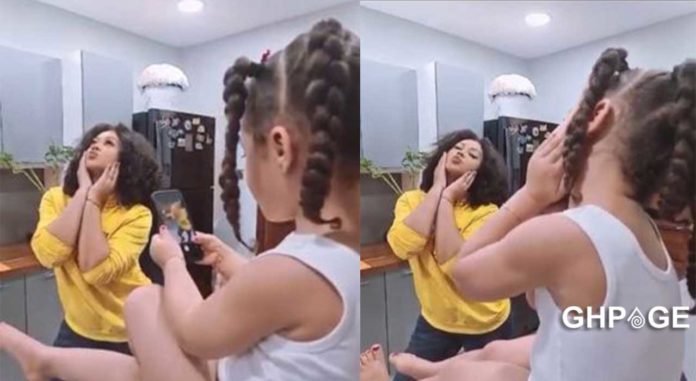 Nadia Buari has posted a video of one of her adorable daughters teaching her how to pose for the camera.

The screen goddesss and her daughter in a rare video posted on the actress’ Instagram page were seen having a beautiful mother and daughter moment.

The video which was taken from their kitchen shows Nadia’s pretty little girl taking pictures of her mum.

Interestingly, the young lady seemed unimpressed by her mother’s poses as she took the time to teach her how to pose for the camera like a supermodel.

In a post captioned, ”My greatest masterpiece.My Children! ??” Nadia’s daughter showed that she might just have a knack for photography.

YOU MAY ALSO LIKE  HGB – “No Balance” ft. Jeff South x Alhaji Sweetest

The post attracted comments from friends and fans. Notable among the comments were colleague actresses, Jackie Appiah and Zynell Zuh’s.

Jackie’s comment read, ”u must post these pictures afterwards ooo u can’t come and waste my daughter’s time ???.”

Zynell who was obviously cracked up by the video shared laughing and love emojis ”?????.”

The post Nadia Buari’s adorable daughters in new video lectures her on how to pose appeared first on illuminaija.