A former aide to ex-President Goodluck Jonathan, Reno Omokri, has advised not to give money to people who use better phones as that would amount to ‘stupidity’.

Mr Omokri said this in a tweet on Friday.

He said that a mobile phone is a communication gadget and not a status symbol.

Omokri added that anyone who gives money to people with better phones is ‘enabling their false lifestyle’.

“A phone is a COMMUNICATION gadget, not a STATUS symbol. NEVER give money to someone who uses a better phone than you. Doing so is not CHARITY.

It is STUPIDITY. You are enabling their FALSE LIFESTYLE. CHARITY funds NECESSITIES, not LUXURIES,” he said.

The former presidential aide also said that one of the things that keep poor people poor and in debt is the habit of upgrading their phones.

“One of the most USELESS habits that keeps POOR people POOR and in DEBT is the habit of UPGRADING your perfectly good PHONE just because APPLE, SAMSUNGMOBILE or TECNOMOBILE have introduced a new one. Do you see RICH people being that STUPID?” he queried.

YOU MAY ALSO LIKE  So Hilarious: Ebonyi Women Sing And Dance After Seeing An Escalator For The First Time (Watch Video) 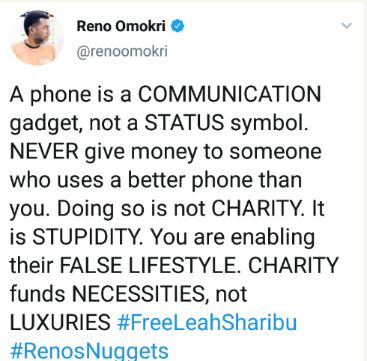 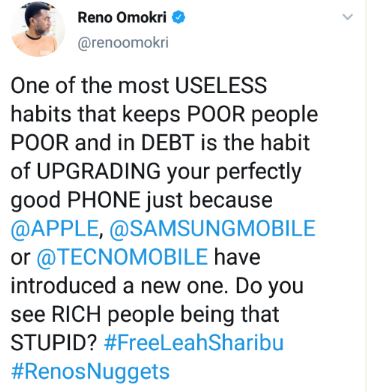