Human rights activist and realtor, Segun Awosanya popularly known as Segalink has reacted to report of the Nigerian police denying claims of attesting Seyitan Babatayo after she accused D’banj of rape.

The activist took to his Twitter page to explain that the police simply acted as intercessor in the case. He added that the documents generated in that regard with the consent of Seyitan’s lawyer and mother proves this. He went on to state some incidents that occurred before the alleged rape incident caused controversy on social media.

I will speak to what actually transpired in this regard for the sake of the public in a few minutes. This is why we need to be circumspect and careful about what we believe online without checking the veracity.

Equity is equality. Our organization sees only humanity and cares less about treating anyone specially because of their status, gender, creed, clan, class or craze. This is our safe space policy which is no respecter of any agenda be it state (Public) or organization sponsored.

Our work speaks only to the truth materializing. When a police officer in the bid to apprehend an alleged thief use unnecessary aggression thereby violating such individual’s rights, he may los his/her authority & have to deal with the infringement. We all have rights.

For those expecting this to be a victimization thread, you can stop reading right here to avoid being grossly disappointed. I speak only to the gray areas and not judging any matter. I felt the need to do this because of the unconscionable actions of a few toxic elements.

I touched on this mildly when the coven of prejudiced primitives started their rumors but I believe the linguistic territory might have been an issue standing against the digestion of what was subtly said.

Seyitan came to us first when this broke out. Her first complaint was about the DPO of the Bar Beach Police station who she said treated her unfairly and she was comforted and asked by me to relax that her complaint will be taken up. I had my reasons.

I told her to go home with her friend that I was going to report the officer and also engage her with one of our Organization’s legal team lead. We had a conference call that evening & we took notes repeating the same advisory. Go home and relax.

The next call that came a day later was to notify me of the response of Dbanj’s team to her concerns online and also the criminal defamation letter, which I believe was unfair and responded publicly to. Still I asked that she takes her time and relax till she is able to document.

For those who don’t understand the rules of engagement, there is nothing actionable that you can obtain from someone whose emotional state is unstable. The stories will be shifty & inconsistent as the sequence of events will not make sense. Thus the need for her to be ready.

But beyond the preparation for cases based on an allegation that is still fuzzy, it was important to know what her prayers were. What gives her closure and what does she see as Justice. I felt if the findings about her connection with the team was anything to go by, they’ll call.

If you are a good scientist, you don’t go into an experiment with a desired outcome in mind. It will be prejudiced and you will learn nothing. So in every case I divorce my interest and focus more on Justice as defined by the vulnerable involved and this begins with the truth.

While we were navigating the action plan on this, I was informed by Seyitan that a friend of hers got her a Lawyer. As puzzled as I was, I said there is no problem if you are happy having another representation. They she added that they made her sign a retainer and I got pissed.

Having realized how disturbed you are emotionally, we never obligated you yet someone got to make you sign a binding document before representation? Anyways, I said let’s see the angle of the lawyer and let’s know how we can help. At this point a criminal defamation……letter has been published by Dbanj’s team and a response was necessary since they didn’t give her the courtesy of an audience given their acquaintance. I never knew the Lawyer also noticed her emotional state and knew she could change her mind thus the need to obligate her.

When she spoke about how the lawyer acted, which I knew was for her good later, I wasn’t pleased and I made her know that it wad unprofessional but this can be worked out still. She told me her lawyer wants her to settle and I got pissed again. Asking her for her own prayers.

We had a conference call with the lawyer and that call was the most annoying this year. So I told her to do as her lawyer says if this is what she wants and only call when she is in need of help. Promising her of my support regardless of what she decides to do. It’s her call.

The next thing I saw were calls and texts about her being arrested and detained. I was told she couldn’t call because her phone was taken from her. I asked the person to send me the location so I can call since it was Lagos and we finally got to know it was IRT.

I called the contacts there but they were out of station yet they got the people on duty to respond. They said they were acting on instruction to intervene on a matter and will revert. I still couldn’t reach Seyitan but kept trying & asking where the Lawyer was.

I even tweeted about the info on her alleged arrest and detention stating that the officers will be brought to book and that this will worsen the case…until I got to know what actually happened. The lawyer was carried along & there was even a resolution at that meeting.

My fears were confirmed and the inconsistencies prove that she is not under any condition to be stressed so when they called again, I only said, please rest and call me when you are fine. I never knew there was an amicable settlement with contribution by the mum who wants peace.

She later told me she was located by members of STER and that she will be staying with her for a bit after leaving the hotel they got her to rest in by Dbanj’s team as approved by her mum and lawyer. I recall stating that she was in good hands at STER and nothing else.

I have always recommended SARCs for anyone dealing with trauma relating to sexual assault whether imagined or real. Psychosocial support is essential to get the individual ready to walk through whatever she can remember objectively before any further advisory.

The receipts on the incident at IRT are also available from the invitation/arrest to resolution and agreement with the consent of the lawyer and parent. What was consistent as mentioned was the police telling her they will detain her. The sequence of this is however unverifiable.

I say this with all consideration and care. Even the few discussions I had with Seyitan based on her concerns were misinterpreted deliberately and weaponized as me preventing Seyitan from listening to the Feminist Coven’s instructions or advisory. The discussion wasn’t new……I was simply reaffirming what I told her when she first came. I simply asked what her prayers were. When the time is right you will hear from credible parties on our role how transparent it was even to the point of featuring her in a documentary but she wasn’t there yet.

When these people told me via different sources what they heard, as credited to me, claiming they were quoting Seyitan’s words, I was disappointed as this corroborated other patterns of inconsistencies. When I asked Seyitan she said it was all a misunderstanding.

I have no grouse with Seyitan and I will always support her regardless but I believe she is under undue influence on this matter with elements that wants to use her for their own agenda. There is no malice in making a case but this I maintain must be the will of the individual.

So pardon me if I don’t align with the forces beating the drums of war on this matter. There are complications that need to concern each and everyone with Seyitan’s interest at heart. Allow her to rest and see mountains as mountains and rivers as rivers. Stop the push & shove.

Allow those assisting her to do their best and let her be free to make her own decision. Go out there and let something happen to you too, then bring your personal case out here to wash publicly. This lady has been through a lot emotionally.

She is most likely afraid to admit many things to those who might have committed their efforts on this matter and desires certain outcomes, this her need to say things a certain way to avoid a backlash. I won’t begrudge her. Not in her condition. But please let her be.

My advice to the @iamdbanj’s team is simple. Stop reacting. Be humane and be matured. Whatever that is hidden will forever come to light. No one out here can judge any man or woman but let’s be fair and avoid undue harrassment and insensitive posts.

If you folks decide to go to court, we will all be praying for you and if you decide you resolve this within yourselves based on your acquaintance, we really don’t need to know. Right now I personally don’t know who the vulnerable is if not both of you!

The police maintained they simply acted as an arbiter and the documents generated in that regard with the consent of the lawyer and parent proves this. But I still can’t place the detention and the words spoken to her which I believe is unfortunate and unconscionable…if true.

There is a lot in discovery and there is so much unsaid. I will humbly advise the warring party to consider Seyitan’s interest more than the wishes of their Ego and agenda. Her interest is paramount in this and it is not your name being dragged in the mud.

Frank’s role is another thread entirely, which I will visit at a later time with full receipts. All we need to know is that this world is wicked and we are all vulnerable. End…. …for the now. 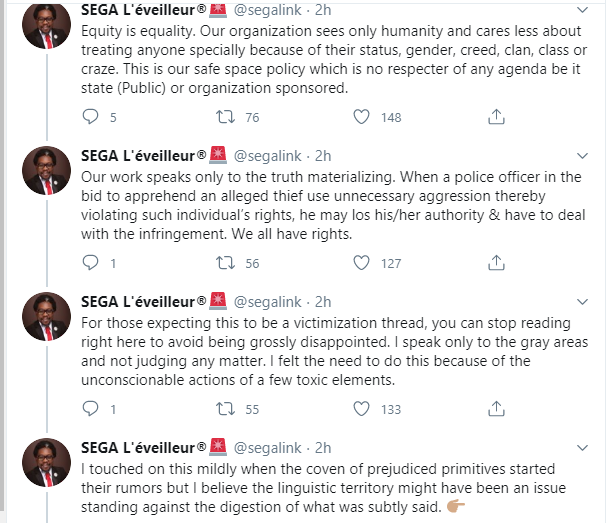