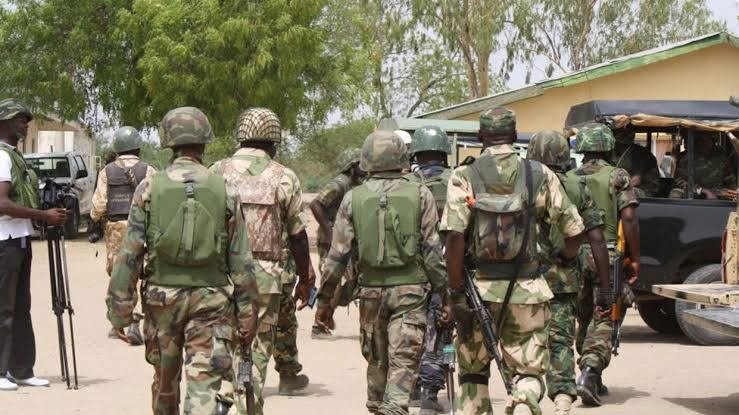 As the nation marked its 60th independence anniversary on Thursday, the Military High Command said on Friday that following its several operations against criminal elements in the country, troops successfully neutralized 869 bandits, terrorists and kidnappers, militia and cattle rustlers in the last three months.

It said a total of 321 kidnapped victims were rescued a total of 1,708 arrests were made as well as recovery of large cache of arms and ammunition.

Coordinator, Defence Media Operations, Major General John Enenche made this known in Abuja just as he noted that a cumulative total of Nine Million, Forty Thousand, Three Hundred (9,040,300) litres of stolen AGO and Thirty Three Thousand Five Hundred (33, 500.00) litres of DPK were recovered from anti-crude oil and anti-bunkering operations.

He said gallant troops immobilized a total of 70 illegal refining sites, 66 dug out pits and 134 metal storage tanks within the period.

Giving details of the operations, General Enenche said, “In the last 90 days, troops engaged in series of land, maritime and air operations, involving both kinetic and non-kinetic activities across the country in major and subsidiary operations.

“The land operations conducted among others across the various theatres of operation include; clearance, ambush, raid, picketing, cordon and search operations as well as artillery bombardments and aggressive patrols.

“Others were maritime operations involving anti-piracy, anti-illegal bunkering, anti-crude oil theft and anti-pipeline vandalism operations as well as other duties such as anti-smuggling operations.

“These operations resulted in the deletion of several terrorists and bandits, inhibition of activities of economic saboteurs as well as exposures and obviation of other criminal activities.

“In all these efforts, some of our troops paid the supreme prize. However, troops of the Armed Forces of Nigeria and other security agencies have consistently exhibited gallantry and resilience in the various operations.

“During the period, scores of terrorists and bandits have been neutralized, others incapacitated and their camps destroyed through ground, maritime and air operations. In addition, several criminal elements, including high profile members were killed in action while others arrested, sometimes together with their families as well as informants and gunrunners.

“Besides, there are records of scores of them surrendering to troops due to overwhelming superior firepower.

“Other feats recorded in the course of our operations were the rescue of kidnapped victims, repel and forestallment of terrorists attack on civilians and troops as well as recovery of caches of arms and ammunition, equipment and vehicles and oodles of livestock.

“In the North-West zone of the country, between 1 July and 30 September 2020, a total of 3,829 livestock, 6,830 rounds of ammunition and 93 assorted rifles were recovered from the armed bandits by the gallant troops in the zone.

“Furthermore, within the period under review, a total of 91 kidnapped victims were rescued and 312 armed bandits were killed in action. In the same vein, a total of 391 arrests were made in the zone including high profile armed bandits, gun runners and bandit’s collaborators.

“A total cash of Four Million, Eight Hundred Thousand naira (N4, 800, 000.00) was recovered from armed bandit’s informants in the zone.

“In the North-East zone of the country within the period, 66 kidnapped victims were rescued by the gallant troops of operation Lafiya Dole.

“Also, a total of 285 rounds of ammunition as well as 84 assorted rifles were recovered from the BHT/ISWAP fighters.

“Similarly, a total of 450 insurgents/terrorists including commanders were killed by the troops. Additionally, 10 gun trucks as well as 38 grenades were recovered. Also, within the period a total of 53 arrests were made including high value targets.

“In the North-Central zone of the country, within the period, troops of Operations Safe Haven, Whirl Stroke and Thunder Strike have achieved appreciable successes. A total of 116 kidnapped victims were rescued.

“Furthermore, troops neutralized a total of 107 armed bandits including militia gang leaders. In the same vein, 84 assorted rifles as well as 385 rounds of ammunition were recovered from armed bandits and other criminal elements in the zone.

“Similarly, a total of 1,136 criminals including family members of the Darul Salam sect were arrested within the period in the North-Central zone.

“In the South-South zone, the Armed Forces of Nigeria working with other security agencies have continued to record tremendous successes against economic sabotage and other sundry crimes in the zone.

“In the same vein, the gallant troops immobilized a total of 70 illegal refining sites, 66 dug out pits and 134 metal storage tanks within the period.

“Additionally, a total of Three Hundred and Thirty One, One Hundred and Seven Thousand (331,107) litres of product suspected to be stolen Premium Motor Spirit (PMS) was recovered.

“Troops also impounded 263 drums of stolen PMS within the period. A total of 18 kidnapped victims were rescued while 46 arrests were made.

“Furthermore, a total of 2,647 bags of 50 kg foreign parboiled smuggled rice were impounded and 27 boats engaged in illegal activities were arrested. Troops also arrested a total of 46 pirates, 11 trucks and recovered 10 rifles and 60 rounds of ammunition; this is in addition to 15 sea pirate camps that were destroyed.

“Equally, troops of Operation Awatse in the South-West zone have continued with the fight against pipeline vandals and economic saboteurs with attendant successes.

“Additionally, a total of One Hundred and Fifty Thousand (150,000) litres of stolen AGO was recovered within the period. Troops also, recovered a total of 3,594 rounds of ammunition as well as 14 assorted rifles.

“In addition to the kinetic operations, the Armed Forces of Nigeria have carried out non-kinetic operations in form of Civil Military Cooperation Activities (CIMIC). A total of 81 boreholes were sunk for host communities across the country. Equally, a total of 14 schools were renovated.

“From our operations within the third quarter of this year, it is obvious that the Armed Forces of Nigeria is winning the war against the enemies of our great country.

“The High Command of the Nigerian Military wishes to thank the general public for their support and further solicit their cooperation towards providing credible and timely information that will facilitate proactive engagements in our operations.

“The third quarter performance of operations conducted by the Armed Forces of Nigeria and other security agencies is a show of our commitment, synergy and determination to lay down our lives to protect our great Nation.

The post Nigerian Army Reveals The Number Of Bandits, Terrorists And Kidnappers Killed In The Last 90 Days appeared first on illuminaija.