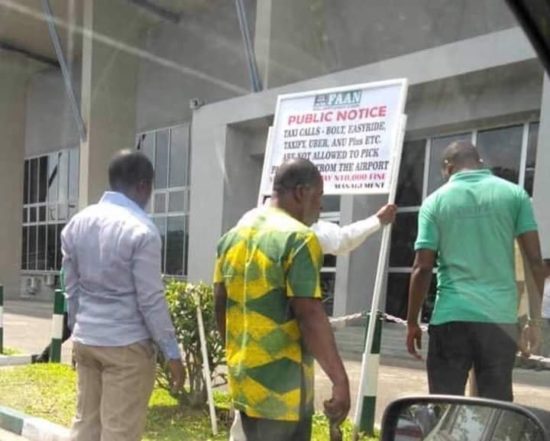 The Federal Airport Authority of Nigeria, FAAN has reportedly placed a ban on Taxify and Uber from the Muritala Muhammed Airport, MMIA, which takes effect from today.

This is coming few days after a viral photo of impounded trucks of motorcycles belonging to the popular ride-hailing platform, Opay, in Lagos, surfaced online.

According to an eye witness that was at the Muritala Muhammed Airport, MMIA, the Federal Airports Authority of Nigeria (FAAN) has banned Taxify and Uber from the airport, the ban takes effect as from today. According to him, I saw this at the airport this afternoon on my way out of Lagos and it reads:

Federal Airport Authority Of Nigeria has issued a directive via this billboard to state that Uber, Taxify and other ride-sharing companies are not allowed to pick up passengers from the airport from today.

The idea behind the new directive by FAAN is to protect the local taxi jobs and drivers who are suffering from low patronage ever since the arrival of Uber and Taxify to the scene.

YOU MAY ALSO LIKE  [Mixtape] DJ Daley – Afrobeats Dynasty Vol. 3

The fine for defaulting ranges from 10,000 naira.

With this ban, the local taxis are back to milking passengers dry with their outrageous charges especially when they see that you are new in the country.

See reactions from Lagosians below;

FAAN – Uber, Bolt etc are not allowed to pick up passengers from the airport, my question is how are they going to differentiate them from families and friends car .. awon mungun pic.twitter.com/roT3FnTpbo

The airport cab men use their mobile phones to order Uber at the airport just to fish them out. To circumvent the airport cabs, I suggest a relative or friend at place of arrival can pre order and send the number to the person arriving. #StandUp4HumanRights https://t.co/uAQbO92cu4

The post Nigerians React After FAAN Bans Uber, Bolt And Others From Lagos Airport appeared first on .