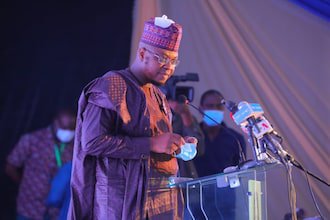 The federal government has justified the ultimatum it issued to Nigerians mandating them to link their SIM cards to the National Identity Numbers (NIN) or risk disconnection.

Isa Pantami, the minister of communication and digital economy stated that the government gave everyone about 12 months to complete the exercise.

According to The Guardian, the minister told Channels TV that many Nigerians refused to comply with the government’s directive when it was issued in February 2020.

YOU MAY ALSO LIKE  14 In 14! Onuachu Can’t Stop Scoring As Genk Go Top

The minister said Nigerians are to be blamed for the rowdy situation at many registration points in the country.

He said the exercise was designed to ensure that it does not take each citizen more than 20 minutes to get registered.

YOU MAY ALSO LIKE  Dessers, Onuachu Will Come Good For Genk – Club Technical Director

“The problem is you know how our citizens are – we need attitudinal change. We announced that all the processes must be under COVID-19 guidelines but citizens will go there (when) their names are not part of those to be captured. You will ask them to go but they will not.”