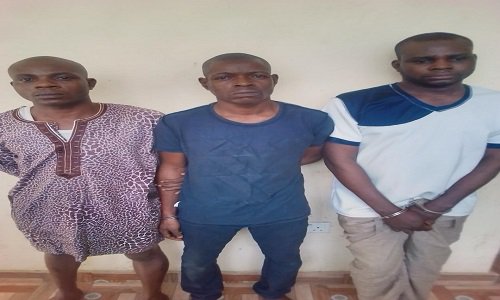 The police have arrested three robbery suspects, Ayomide Babatunde, 30; Tunde Shabi, 37, and Femi Adeolu, 27, described as specialists in taking their victims to ATM machines to withdraw money from their accounts.

They were arrested by the Lagos annex office of the Inspector General of Police Intelligence Response Team (IRT).

The suspects are also said to be ex-convicts.

They were arrested after they allegedly attacked some persons including a woman and transferred millions of naira from their victims’ bank accounts using their ATM cards and handsets.

Besides,they are alleged to have snatched their victims’ cars which they drove to Cotonou in Benin Republic to sell off.

YOU MAY ALSO LIKE  TOO BAD!! Police Patrol Vehicle Used To Convey Grass (Watch Video)

Ayomide who claims to be from Ekiti and a father of three children said he could not go beyond secondary school on account of the death of his father.

“To be able to fend for myself, I became an estate agent but I was arrested when I joined Aye confraternity due to unending bloody clashes with rival cult groups,” he told his interrogators.

“I was eventually charged to court and sent to prison.

“In the prison I met Ola, Tunde and others. We formed a car snatching gang when I came out of the prison.