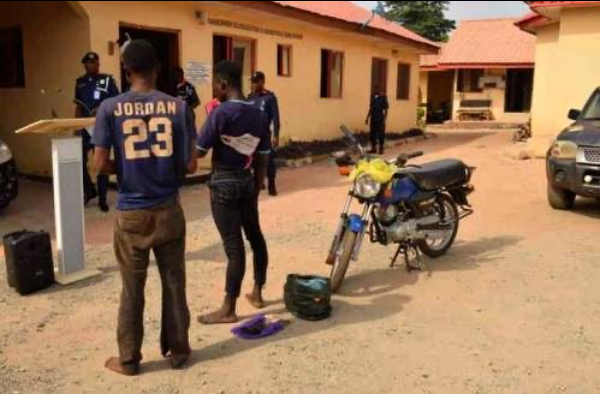 Operatives of the Ondo Command of the Nigeria Security and Civil Defence Corps (NSCDC) have arrested two members of the ‘chãp chãp’ robbery gang in Akure, Ondo State capital.

Ondo Commandant of NSCDC, Eweka Edenabu told newsmen that the suspects were arrested based on credible intelligence and information gathering.

“One of the suspects would pose as Okada rider in search for passengers while the others would hide. As soon as the motorcycle picks a passenger and approaches a lonely terrain; the rider would stop in pretence that the motorcycle was faulty, hence others would come out from their hidings, unleash terror on the victim, and cart away with all his or her belongings.

“As at the time they were arrested, about seven victims have identified the suspects as notorious criminals however, an investigation is still ongoing.

“In furtherance to this, they will all be appropriately charged to court for justice to take its course.”

One of the suspects, Oluwaseun revealed that he has just been released from prison for rape.

The post NSCDC nabs suspected members of a robbery gang in Ondo appeared first on illuminaija.