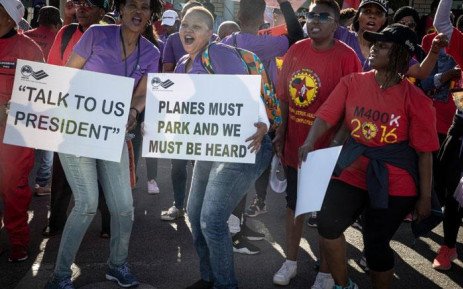 South African Airways (SAA) in association with Numsa and the SA Cabin Crew Association (Sacca) are protesting opposite the airline’s office park.

Workers took their feet to SAA offices at Kempton Park after the government failed to to meet a deadline to make available funding for a restructuring plan.

However, the airline’s administrators have summoned on creditors for a meeting on Friday.

The rescue plan that was published says it needs R10 billion at least to work, but despite assurances from government, the cash still remain not materialised.

YOU MAY ALSO LIKE  “We Can’t Trust Nigerians Working For Us”: Global Company Shuts Operations In Nigeria

Numsa’s Phakamile Hlubi-Majola said that a larger percentage of the union’s members didn’t have enough resources to travel here.

“People have had cars and houses repossessed, kicked out of rental homes, they’ve lost assets in this period and government has done nothing.”

She also said the government showed no care towards handling of the SAA saga.

“All of them have not gotten any salaries but the business rescue practitioners, which government appointed to run the process which was supposed to save these entities, they’ve been paid.”

The group will continue picketing till 2pm.