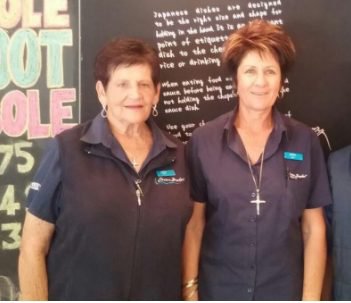 Owner of ocean Basket restaurant in the Mall of the North and her mother were found dead in a car on Thursday.

Limpopo police said the bodies of 55-year-old Lizette Deacon and her 70-year-old mother Hettie were found tied up in an abandoned car and brutally murdered.

“They were tied inside their motor vehicle, which was found abandoned on the R37 next to the Kushcke off-ramp,” said Mojapelo.

Police said they launched a search operation for the two women after a neighbour went to visit them but could not find them at home, instead found traces of blood in their home.

The two women lived together in Welgelegen near Cycad.

YOU MAY ALSO LIKE  Call Your Members To Order, We Can’t Be Friends With Armed Herders – CAN Tells Miyetti Allah

“The motive for the killings is unknown at this stage, but robbery cannot be ruled out,” said Mojapelo.

One of the restaurant managers, Ossie Gangata, said staff members were shocked and saddened on hearing the news of their brutal murder.

“To us, Lizette was more than a boss, she was like family. She would listen to our problems and help whenever she could.”

“She didn’t act like someone who had a position. It’s a great loss to us,” said Gangata, who had worked for Deacon for six years

Mojapelo said the police is investigating the murder.

YOU MAY ALSO LIKE  Osun Plans To Eradicate Unemployment, Poverty With N615 Million