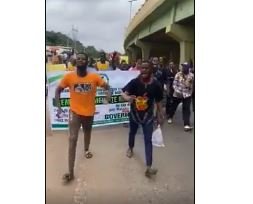 Students in Ogun State marched in solidarity today protesting the federal government’s upward review in the pump price of petrol.

The students, under the auspices of the National Association of Ogun State Students (NAOSS) took to the street on Tuesday to express their grievances against the President Muhammadu Buhari-led Federal Government.

They also composed a song for Buhari as they marched in protest.

The students, while marching towards the Oke-Mosan Governor’s office, chanted songs that suggested they were not pleased with the decision of the Federal Government that led to the increase in pump price of petrol and electricity tariff.

The students said they will continue to say no to what they termed, “anti-masses policies” of the government, including bank stamp duty charges.

They called on Buhari to reverse the policies immediately, saying “Aluta continua”.