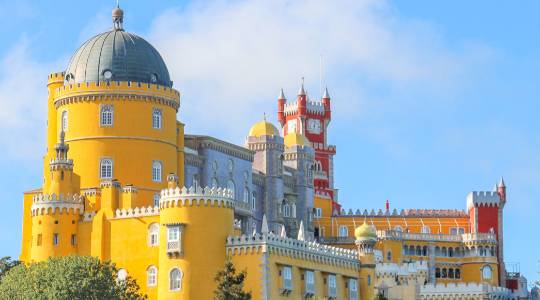 If you one of those who are drawn to countries with enthralling cities, wonderful food, wine, and diverse landscapes then the best places to visit is Portugal and Spain in the Iberian Peninsula.

The Iberian Peninsula is located in southwestern Europe, bordering the Atlantic Ocean to the west, the Bay of Biscay to the north, and the Mediterranean Sea to the south and east.

The name “Iberian Peninsula” is most commonly used to refer to Spain and Portugal, as these two countries comprise most of the peninsula’s landmass.

However, the peninsula technically includes the tiny country of Andorra, a sliver of France, and the British Overseas Territory of Gibraltar.

From dramatic fortresses and tranquil university towns to cities renowned for their good culinary offerings, these places are blessed.

Here are a few of the Spanish and Portuguese cities to visit in the Iberian Peninsula.

Overlooked by the snow-capped peaks of the majestic Sierra Nevada, Granada is home to a lively student population, eateries dishing out free tapas, and glorious remnants of its Moorish past.

Granada’s most famous attraction is the Alhambra, an awe-inspiring palace and fortress that was constructed by the Moors over the course of a few centuries. The Alhambra’s Islamic architecture (think horseshoe arches, graceful fountains, and vibrant tiles decorated in geometric patterns) might make you feel as though you have been whisked off to Morocco.

For superb sunset views of the Alhambra, head to the Mirador San Nicolás viewpoint. In this small square, tourists mingle with locals playing the Spanish guitar, all while watching the Alhambra blush in the last light of the day.

If you’re feeling especially energetic, climb even higher—up to the Ermita de San Miguel Alto. This hilltop affords splendid views of the Alhambra, the Sierra Nevada, and the rooftops of Albayzín. As you walk back downhill to Granada’s attractive center after the sun has set, you’ll find that Albayzín looks especially atmospheric when the lanterns of its Arabian-style shops are all aglow.

Another of Granada’s star attractions is the 16th century Royal Chapel of Granada (Capilla Real). Queen Isabella and King Ferdinand (the so-called “Catholic monarchs” who were instrumental in taking Granada from the Moors in 1492) are buried in this chapel’s crypt.

For centuries, Córdoba was the Moors’ capital and one of Europe’s most sophisticated cities, boasting esteemed universities, libraries, and public bathhouses. It is said that Córdoba’s Muslims, Jews, and Christians lived harmoniously here, creating a dynamic community where knowledge and talents were shared.

YOU MAY ALSO LIKE  Becky G x Burna Boy – “Rotate”

Córdoba’s most famous attraction is its magnificent Mosque-Cathedral (Mezquita), which marries monumental Islamic—and Christian—architecture. During the late 8th century, the Moors started the construction of the mosque on the site of what was previously a Visigoth church.

Over the course of a few hundred years, they continued to enlarge the mosque, eventually creating a breathtaking building that has nearly 900 columns, and that incorporates golden mosaics into some of its most sacred sections.

When the Christians recaptured Córdoba from the Moors in the 13th century, they left the mosque largely intact.

However, in the 16th century, a massive section of the mosque was removed so that a Christian cathedral could be constructed inside. So elaborate was the cathedral that it took centuries to build.

Long before the Moors ruled Córdoba, the Romans also left their mark throughout the city.

Today, you can still see the ruins of a Roman temple, as well as an attractive Roman bridge (Puente Romano). Since the bridge is pedestrianized, it is a delightful place to stroll and take in views of Córdoba’s Old Town skyline. You’ll likely be serenaded by musicians, and you might even glimpse a flock of sheep grazing on the banks of the Guadalquivir River.

Córdoba’s Old Town is known for its charming patios, which are studded with a colorful array of potted plants and other greenery.

In May, local residents competing in the Patios Festival (Fiesta de Los Patios) open these private courtyards to flower enthusiasts and tourists alike.

Known as the “City of Three Cultures” since it was once home to a thriving Christian, Muslim, and Jewish population, Toledo plays host to a cathedral of epic proportions, a 10th-century mosque, and two impressive synagogues.

The Toledo Cathedral (Catedral de Toledo) is often described as one of Spain’s finest. Its architecture is overwhelmingly Gothic, but it also has elements of Renaissance and Mudéjar design.

Inside the cathedral, you can find paintings by Spanish masters such as Velázquez and Goya, as well as El Greco, the Greek artist who lived in Toledo for much of his life.

If you’d like to see more of El Greco’s work, including religious paintings and his celebrated canvas depicting the city of Toledo itself, be sure to head to the El Greco Museum (Museo del Greco). 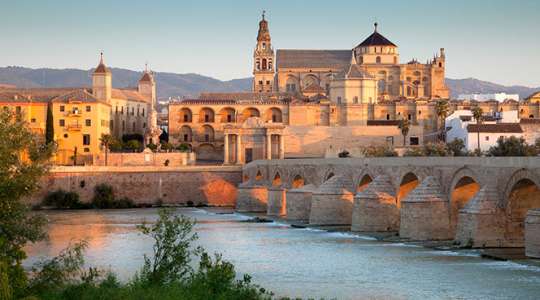 Toledo has also long been a famous sword-making center, thanks to its strong steel and talented blacksmiths. If you’re in the market for a souvenir sword, or perhaps a kitchen knife, you’ll be spoiled for choice, as Toledo’s shops are brimming with steel souvenirs.

And it’s not just fine cooking accessories that make Toledo a culinary paradise, because the city is also known for its saffron, its fine marzipan, and Manchego—cheese made from sheep’s milk.

As you walk Toledo’s steep streets, you’ll be wowed by the extent of the city’s walls.

These fortifications are a progressive effort—the Romans, Visigoths, Moors, and King Alfonso VI (who took Toledo from the Moors) all left their mark.

Toledo is a popular day-trip for tourists visiting Madrid, as it is only 45 miles away. Frequent bus connections link the two cities. 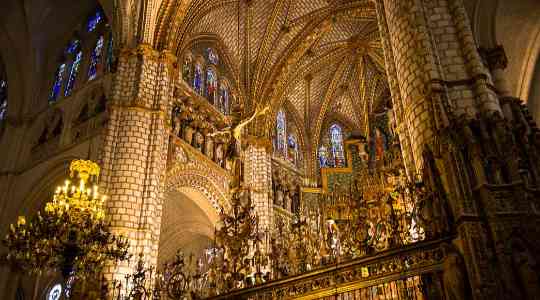 Located on the Portuguese Riviera, the refined city of Sintra boasts dreamy palaces and castles, magnificent gardens, and a dramatic hilly setting.

Long a refuge for Portugal’s royalty and elite, much of Sintra is included on UNESCO’s World Heritage List.

With so many worthy sites to visit in Sintra, it can be difficult choosing where to go—particularly if you only have one day. 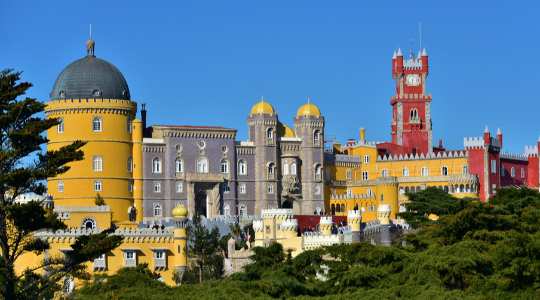 As its name implies, the castle was constructed by the Moors. However, successive rulers, as well as the great earthquake of 1755, altered the look of the fortifications.

While the Moorish Castle was built with defense and function in mind, the Pena Palace (Palácio da Pena) is decidedly romantic and flamboyant. Featuring lemon and tomato-colored wings, the Pena Palace was built for King Ferdinand II in the mid-19th century.

Its flamboyant exterior makes it a favorite with photographers, and since it is perched on one of the area’s highest peaks, it provides stunning vistas, too.

The post OMG!! Check Out Top 5 Most Beautiful Places To Visit In The Iberian Peninsula As A Student/Tourist appeared first on illuminaija.