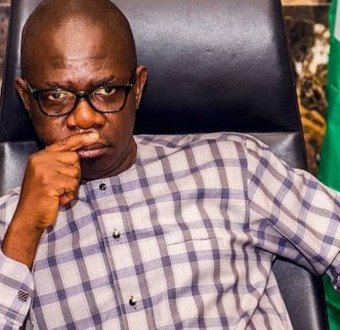 There is anxiety in Ondo as lawmakers of the state house of assembly have commenced impeachment process of Alfred Agboola Ajayi, the state deputy governor.

Ajayi who recently defected to from then All Progressive Congress (APC) to Peoples Democratic Party (PDP), has been at loggerhead with the state governor Rotimi Akeredolu.

The embattled deputy governor was served an impeachment notice on Tuesday, July 6, by the lawmakers over gross gross misconduct.

Security operatives were also said to have arrived the premises of the assembly in order to prevent the breakdown of laws.

Legit.ng gathered that fourteen lawmakers have supported the impeachment of Ajayi, with the process said to be inspired by the state governor.

The commencement of the impeachment cam less than twenty-four hours after the state governor sued the Ondo state assembly over plans to impeach him amid clashes of political interest highlighting the forthcoming election in the state.

Other defendants in the suit filed by Agboola before the court were the inspector-general of police Mohammed Adamu, State commissioner Of police, Department of State Services (DSS) and the speaker of the Assembly, David Oleyeloogun.

YOU MAY ALSO LIKE  [Video] Stormzy – “Own It” ft. ED Sheeran x Burna Boy