The family of Patrick Reynolds Yeboah, the guy who got paralyzed by a billboard 3 years ago has released the details of the one-week funeral celebration of their beloved to the public.

According to the flyer sighted on social media having the details of Patrick’s one-week observance, the celebration would take place on 27th September 2020, at Spintex Flowerpot. Time: 12 noon.

See the flyer below; 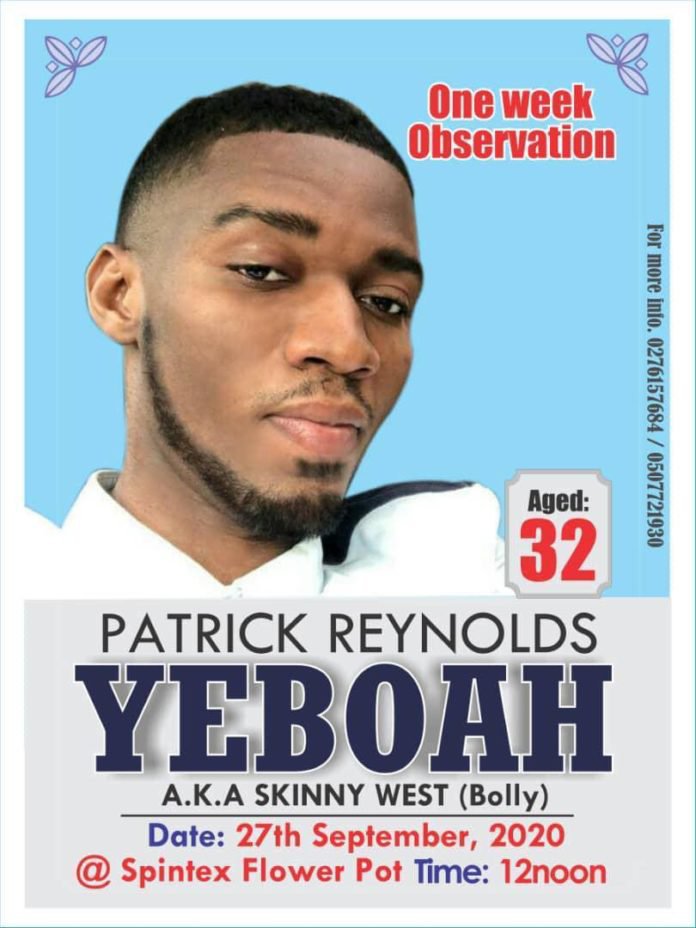 Ghanaians were shocked to the bone when the news of the sudden demise of the then second-year marketing student studying at Zenith University, Patrick with hopes of becoming a renowned marketer went viral. He died at age 32.

During that period he became immobilized, his friends took it upon themselves to seek justice for Patrick. They reached out to the court to fight for them but unfortunately all efforts proved futile.

The company that owns the billboard that fell on him -Medex Media- refused to take responsibility for the accident. Poor Patrick nicknamed Bolly was left on his own to fight for life with no one to run to.

Following when he was confined to bed, several stories popped up. A Sakawa man identified as Abusua came out to say that Patrick’s billboard accident is not natural, he claimed it was spiritual.

According to Abusua, Patrick got paralyzed due to the fact that he (Patrick) failed to show appreciation to the ‘juju’ man who helped him.

However, Reynold denied all allegations levelled on him by Abusua when they met at the studio of Vision 1 a year after he got paralyzed.

The life of a gentle soul is no more. It’s painful how a young ambitious man’s life is cut shot due to injustice. HMM let me leave it here. Rest on Soldier, you fought well. RIP.

YOU MAY ALSO LIKE  FINALLY!! Messi Names The Best Goal He Has Ever Scored (You Can’t Guess This)

The post One week funeral arrangement of Patrick, the guy who got paralyzed by a billboard released appeared first on illuminaija.