I know you’ve been hearing this popular motivational quote of “Never Stop Dreaming“, but this time I have a highly relatable story of a high profile person to back it up, so I believe you all want to hear me out.

Please, and Please! Never stop dreaming, and don’t ever sleep on yourself or your talent, don’t care about what anyone is saying about your sounds and vibe. Just be you and keep believing!

In 2010, Wizkid publicizes one of his biggest on Twitter but seems a whole lot of the App users doesn’t regard the Starboy then.

Cause before now, the Tweet has no single retweet, reply or even like, that must have been a very sad thing for Wizkid then. Many people that saw that tweet then would have thought “What’s this one saying?” back then.

But who knows how tomorrow e go be? Just like what Zinoleesky said in his Who Knows song!

YOU MAY ALSO LIKE  Davido Wasn’t Given A Chieftaincy Title, He Was Only Adopted Into The Family – Traditional Ruler Explains 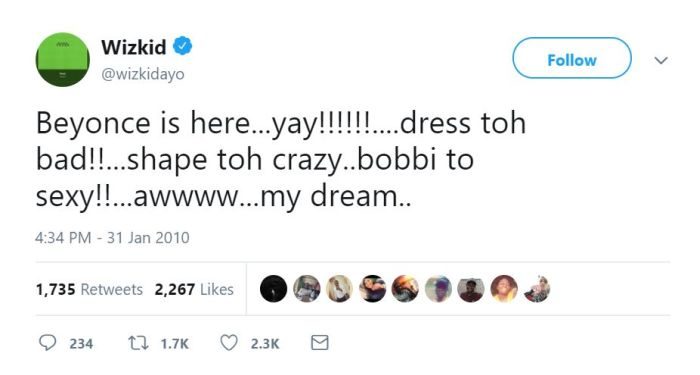 Imagine the tweet garnered 1.7K Retweet and 2.2k likes within minutes after one Wizkid fan took his time to dig out this old Starboy’s visionary tweet.

I know a whole lot of upcoming artistes, are going through some hard times, whenever you think you are dishing out musical content, and you ain’t getting the needed attention yet.

Yes! Don’t feel sad! I think it’s normal for people to sleep on your for sometimes, and they later wake from their slumber when it’s your time… The thing is you shouldn’t sleep on yourself, even when the whole world is.

If Wizkid has felt the pressure of not getting attentions on his tweet back then in 2010, and he has decided to let the dream slide, then we won’t be here talking about it today.

It’s perfectly okay to grow gradually, but you shouldn’t rush it! If it takes Wizkid 9 good years to get Beyonce‘s attention after dreaming of working with her, then you should know everything has its own timing.

Beyonce recently released a 27 tracks album titled “The Lion King – The Gift” and she featured Wizkid on one of the track, isn’t that inspiring enough?

In case you don’t have the song yet, You can Get It HERE

Never Stop Dreaming!!! Keep Hustling, Your Pay Day Is Near…

Do You Believe In Yourself? Tell Us Your Biggest Dream As An Artiste