On the 15th of DEC 2018 I and my husband was involved in a motor car accident along kwale asaba road that left us with fractures ( I broke both of my tights a d my right arm while he broke just a thigh).

He was immediately rushed to a near by medical center where it was ascertained that he died because of the high dosage of d injection she (joy akhator Lawrence) said was a pain killer.

His death by this time was not made known to me till few weeks later when I received a call from my landlord in Lagos saying she’s sorry for my loss and that my sister in-law (loveth akhator) called her to tell her of the ordeal and also requested that access been given to her(loveth akhator) to pack my belongings in the apartment since my husband ( Emmanuel akhator) his brother was late. That she wanted to know weather its with my consent. That was where d battle started officially.

They never paid any visits to me or asked after my well being or asked how we r going about the surgeries I had to later go through ( because it got to a point I could no longer take the pains when the traditional bone man was treating me).

Instead they went straight to my husband’s office in sapele delta state to inform them of his demise and further demanded for what was due to him from the company.

They even went on telling his friends and colleagues that am perfectly fine when they ask of my wellbeing not until d day of his funeral (January 12th,2019) when I was not seen on the ground.

Then they stated asking many questions till they finally were able to get someone (a friend of mine) that showed them the hospital I was admitted Into.

YOU MAY ALSO LIKE  BANGER!! Naira Marley Teamed Up With Mayorkun To Drop A Mad Jam (Listen To The Snippet)

MeanWhile they have been getting financial support from his office n friends without my knowledge.

On getting to the hospital his colleagues were shocked at the condition they found me it was then they now told me of the statement made by my in-laws stating I was fine…… That it was my absence at d funeral ground them insisted on seeing me…..

All efforts for his friends to meet with me were thwarted by my in-laws since they were the ones they always go through…..d night before the funeral my siblings had called me from home ( I was still in the hospital) that my late husband’s elder brother (Osazee akhator) and some of their relatives came to our hose to demand for my baby (Success Osose akhator) but they said its late that she will b present in the morning for the funeral but my inlaws said no that they must take her that night and was threatening to drop the corpse of my late husband in my fathers compound.

After all the shoits here and there from both families they left that night without my baby…on the funeral day, right from the mortuary that was wen the fight for baby success started till date. According to witnesses around. Success was forcefully taken from my siblings and that was d end…..

YOU MAY ALSO LIKE  DJ Cuppy’s Gelato Song Climbs To Number 3 On Apple Music Chart In Just One Day!

Several meetings have been held by both families in their house but it all proved abortive.

They became more angry wen they found out that my husband had no entitlement from his company after calling d company 3months after his burial…….. Since he wasn’t up to a year yet he was not added to d company’s policy…….. This I think made them hold on to my baby from the beginning thinking she was his next of kin�

They demanded all sort of things and called me all sorts of names . went as far as tarnishing my image n levying all sort of false allegation on me..

With all these I wasn’t moved so they decided to permanently hold on to my child .

Those that later showed interest in the case asked them y they haven’t returned my 2 year old baby yet to me, they started telling them that they are holding her pending when I fully recovers so as to trick them n make dem back off

My baby they have been using to get financial support from his friends. 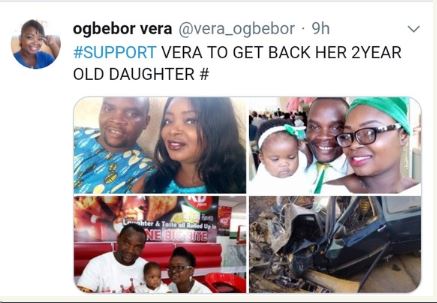 Hidden Codes for Android | Brought to You by Uchenna Uwandu

Nigerians Don’t Be Scammed | Take Note of These Tips