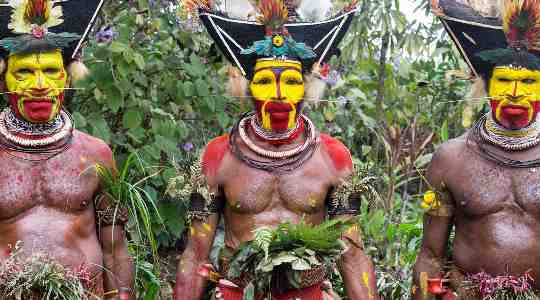 The Huli wig school is one of the oldest traditional schools in Hela Province and possibly PNG. Its lessons have been passed down from generation to generation and still exist today. 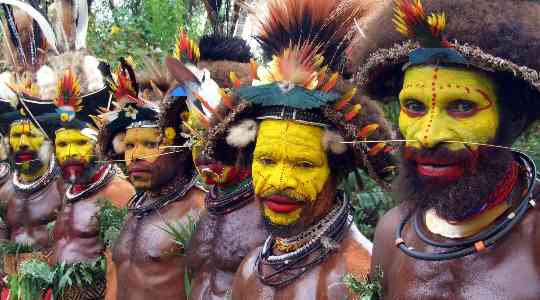 Huli men are best known for their custom of wearing decorative woven wigs, elaborate head-dresses decorated with bundles of multi-coloured feathers and adopted a celebratory festivals.

The famous Huli Wigmen attend the wig school, in which they live together in isolation from the rest of the community. Wig masters are normally elders who have special powers and are able to cast spells to enable the growth of hair.

At wig school, they learn the fundamentals and rules of Huli traditional customs: growing their hair; collecting feathers; and making armbands.

The Huli is the largest ethnic group in the Highlands, with a population somewhere between 300,000 to 400,000 people, covering the whole of Tari.

The decorative woven wigs of Huli men are used as elaborate headdresses and decorated with bundles of multi-coloured feathers during singsings (celebratory festivals).

These wigs are specially made by a unique clan known as the Huli Wigmen, who attend wig schools and live together in isolation from the rest of the community. 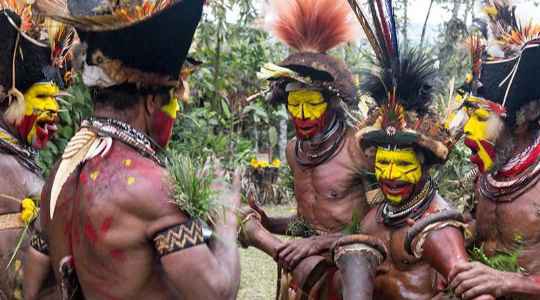 In Huli culture, boys live with their mothers until they are seven or eight years old, then they live with their fathers to learn skills like hunting with bow and arrow, building mud walls and making houses.

At the age of 14 to 15 years old, they go to wig school and don’t return home at all until they graduate. Sometimes they stay at the school for up to 10 years.

At wig schools, they learn the fundamentals and rules of Huli traditional costumes: from growing their hair to collecting feathers and making armbands. 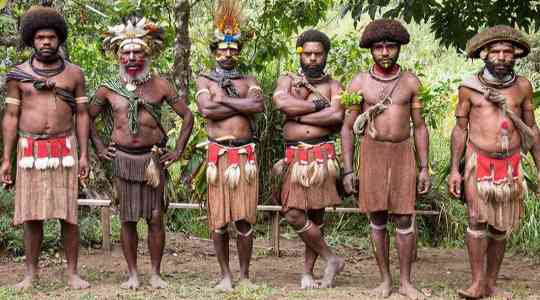 To be admitted into the wig school, the boy’s family has to pay a tuition feeo of 200 Kinas (30,900 Naira) or a pig after which the boy stays with his tutor for 18 months to grow one wig.

If they want to grow another, they stay longer and pay again. Pigs are an acceptable form of payment because they are highly valued and treasured in the Highlands, and are often used to pay a bride’s dowry or for other settlements.

But not everyone is accepted as a student at the wig school. Only young and virgin males can enter wig school. To determine who is a virgin, the teacher puts a powerful spell on the student before he comes to the school. It is believed that the spell will not work on someone who has had sexual relations.

YOU MAY ALSO LIKE  FG averts crisis, pays January salary to ASUU members not enrolled in IPPIS

To cap it all off in quite an amusing way, the Huli wigmen believe that women do not have any business with wigs and that they do not need to go to school.

The post PLOT TWIST! See The Hairy Tribe Where Boys Have To Learn How To Make Wigs In Order To Become Men appeared first on illuminaija.