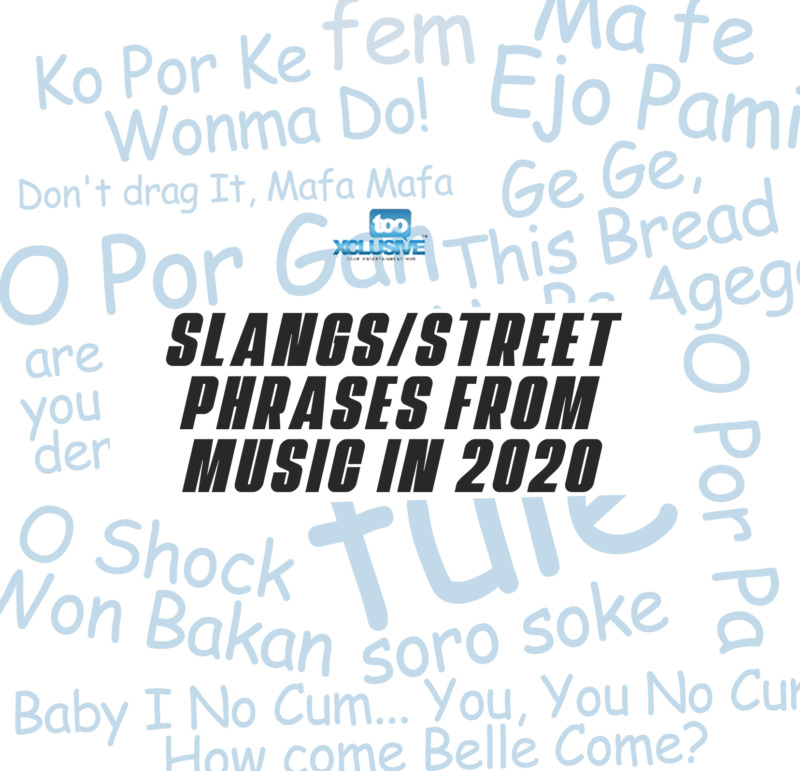 While we had amazing and brilliant bops/songs in 2o20, our street vocabulary was also being updated. Just like every other year, our favorite acts and even newbies have brought forth new slangs and street phrases for us to enjoy.

While we wait for new ones this new year, here are top slangs/ street phrases that emerged from the music industry last year (2020) which will continues to ring in our minds.

“Ge Ge, This Bread No Be Agege”

We can’t really say what Mayorkun was thinking when he came about with this phrase but it got stuck immediately in our heads. The phrase emerged from the track “Geng” and since then any Mayorkun song including features without this phrase is not complete. For Mayorkun, if it’s not agege bread, it’s not the real deal.

What started as a regular trend on Twitter rose to a different kind of movement on social media and its all thanks to Zlatan; we know how the singer does it with trending stuff. “The Matter” was birthed from the “Solve The Matter” tend where Twitter users gave different cases of issues they are experiencing and it always ends with who go solve the matter?

“Mafa Mafa” by the DMW crew sees the artistes dropping rap verses back and forth in Yoruba with “Mafa” loosely translating to “Don’t pull it.” This slang is used most for Drug Abuse cases and among exploring Nigerian youths. Another top slang that refuses to leave our mouths.

Taken from Bella Shmurda’s trending hit “Cash App” which features Zlatan and Lincoln, the phrase translates to Do you have “Do You Have Credit Card”.

This Cash App song gave birth to lot of Street Phrases and not just only slang. Below we had;

“O ni Maga Bill Am, Small money, Ball Out, Usain Bolt, Run Am
You get sure client, Lock am, If e no get money leave am, EFCC n’bo Japa”

If you’re at a party and you don’t get to hear the lyrics “Are You There” repeatedly from the speakers, then you’re not at the right party. Nothing much can be said about this track because it speaks volumes for itself.  This slang gotten from DJ Double Kay and Yung Effissy has been bursting speakers, scattering street parties and carnivals since its release; It’s very catchy and addictive.

The song also birthed the Street phrase – “Mafe’jo Pami, Emi gan n’ejo lowo” which means don’t bother me or choke me with your talks and problems, i also have mine to deal with.

“I No Come This Life To Suffer”

We feel you Tiwa, nobody came to this life to suffer so enjoyment is a must. Coined from her smash hit “Koroba” off the “Celia” album, the phrase has become a mantra/prayer for everyone both young and old.”

“If No Be You, Tani Mo Fe So Story Aiye Me Fun”

Jamopypeer gave the guys another smooth line to get the ladies. The phrase is taken from his buzzing track “If No Be You” which features the Mayor of Lagos, Mayorkun. It translates to if it’s not you, who am I going to tell my life story to?

Q-Dot’s street banger  “Ah!” has a lot of catchy phrases but this one is unforgettable. With the increase in cases of paternity fraud in the country, Q-Dot tackles the moment when a girl tries to force a pregnancy on a guy, like how, did the pregnancy fall from the sky?.

This came to life as a result of the #EndSARS protests and it wasn’t restricted to just those on the streets but the cream of the society. The phrase which translates to Speak Up is one of the biggest slang this year because it was used to ginger the movement against police brutality. It was also used to label the new generation of youths in the country – the “Soro Soke” generation. Several artistes hopped on the trend But Street Ambassador Small Doctor released a song with the same name as title to push the Slang further.

O por or Opor in Yoruba means enjoyment is Plenty! or something very big. This term was made popular by Zlatan and Rexxie on their song ‘Opor‘ released 2020.

Dapo Tuburna and Mayorkun gave Nigerians another slang to roll with and on the tune “See Finish,” they urged everyone not to let anyone see the whole of them. The singers advised us not to let anyone get too familiar in order to avoid see finish.

This slang came to be after the release of Laycon’s “Fierce” which features Reminisce & Chinko Ekun. This was used by his resilient fans who identify themselves as the icons.

This slang stemmed from Naira Marley and Mohbad’s escapades with a nympho; the bad lady Marlian that doesn’t get tired of sex. The tune “Koma Jensun” simply means (Didn’t Let Me Sleep).

This controversial slang has been in existence for a long time but Davido’s big tune “FEM” made it more popular. It basically means shut up. Someone talking thrash about you? Tell them to FEM!

Naira Marley once again in 2020 dished out a lot of gems on his 2020 single “Aye” he sang that life isn’t hard, Humans living in life are the ones who make it difficult for themselves due to jealousy and evil.

This Another slang/phrase that got more popular with the help of music. Olamide and Bad Boy Timz gave us this slang from their collab “Loading” off Olamide’s “Carpe Diem” album. The track also birthed ‘Load din din din, loading’ and made peeps more familiar with Loader.

Zinoleesky’s trending tune, “Kilofeshe” off the “Chrome Eccentric” EP had everyone chanting the slang which translates to “What do you want to do?”.

Sorry if you’re not a Yoruba speaking person because this slang is very raw. Naira Marley on the track “Didolobo” shared that Ladies are meant to be treated well and specially on the bed and of course Money is meant to be spent.

Another raw slang that is not meant just for anyone. This slang which is from Mohbad’s “Ponmo Sweet” plays a scenario where a lady claims to be tight down there when she actually has been with every Tom, Dick, and Harry. Kayamata brought about this street phrase.

This phrase is from Naira Marley’s late trending 2020 street jam ‘Koleyewon‘. The tune is a call for everyone to maintain their street credibility. The Marlian president solidifies his Mafo slogan with this record and street phrase. “To ba Fo o ti Fuck Up, To Ba Fuck Up o ti sey Aiye” this means don’t fall to pressure or your opponent /obstacles and if you do, you have offended the Geng! (Never Succumb To The Pressure You Can Defeat/Overcome).