President Akufo-Addo has reacted to the gruesome murder of the Member of Parliament for Mfantseman Hon. Ekow Quansah Hayford in the early hours of Friday morning 9th October 2020.

In a Facebook post reacting to this development, Mr Akufo-Addo said “I am shocked and saddened by news of the murder of the Member of Parliament for Mfantseman, Hon. Ekow Kwansa Hayford, by suspected armed robbers in the early hours of this morning.

“By all accounts, he was very much appreciated and loved by his constituents, and I expect the police to bring the perpetrators of this gruesome, cruel act to book as soon as possible.

“My deepest condolences to his family, to the Mfantseman constituency, to the New Patriotic Party, and to Parliament. May his soul rest in perfect peace.” 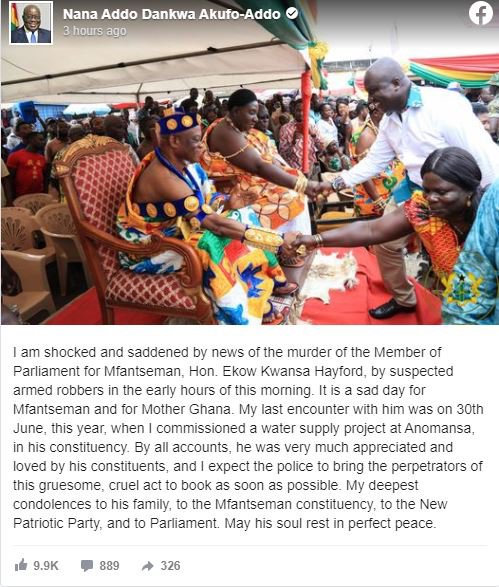 Meanwhile, the Inspector General of Police (IGP), James Oppong-Boanuh, has placed a GH¢20,000 bounty on the head of the killers of the Mfansteman MP Ekow Quansah Hayford.

A statement issued by the Police said: “The IGP has sent investigators from CID Headquarters to support the Central Region’s Crime Scene Team to solve the robbery incident and murder of Member of Parliament for Mfantseman, Hon. Ekow Quansah.

“A reward of twenty thousand Ghana Cedis (20,000.00) has also been offered to any person who gives credible information that will lead to the arrest of the perpetrators, while the public is being urged to remain calm. “

Mr Hayford is reported to have been killed Friday dawn when some suspected armed robbers attacked his convoy on the Abeadze Dominase-Mankessim road in his constituency. RIP