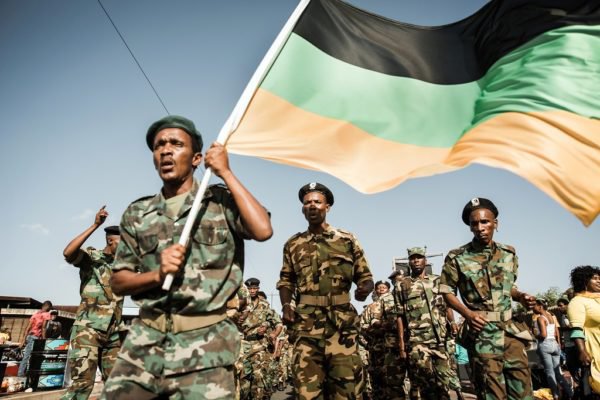 A group that claimed to be uMkhonto We Sizwe veterans demonstrated on Friday.

They marched through the Durban CBD seeking answers from the governing party.

During the protest, they called on the ANC to respond to the demands of members of former liberation armies.

In the memorandum, the protesters highlighted their wants.

They want ANC leaders implicated in corruption or criminal matters to step down or resign.

The protesters also want free education for the youth “as promised by the administration of former president Zuma”.

In the memorandum they also demanded that R250m should be given to “MK and other liberation war veterans for housing as promised by Mandela and Ramaphosa”.

Other demands include “decent employment and opportunities” for all SA citizens and the youth.

Dumisani Thango representing the protesting MKMVA accused the ANC of neglecting their calls.

“The ANC, our leaders think they are clever. This is a family problem,” he said.

“There is no MK without ANC and there is no ANC without MK. But now, they take state resources to solve our issues.”

However, the Umkhonto we Sizwe Military Veterans Association (MKMVA) in KwaZulu-Natal distanced itself from an alleged plan to “shut down” Durban.

This was after a WhatsApp voice note about the alleged shut down that will hold on Friday went viral on Tuesday.

The association released a statement, saying its provincial executive committee (PEC) did not invite any member to be a part of the planned shutdown “forcing the  government and the ruling party … to attend to the demands of all combatants from liberation armies.”