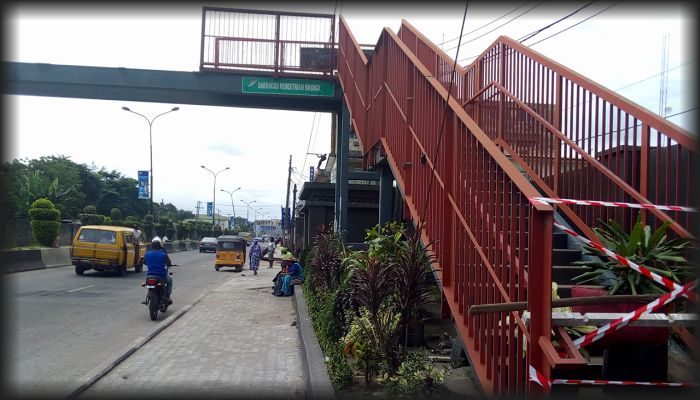 Some worshipers at St Dominic Catholic Church, Yaba and other Lagos road users have begged the Federal Government to replace the damaged footbridge on Herbert Macaulay Way and others on the axis.

The News Agency of Nigeria (NAN) reports that a portion of the footbridge at Barracks Bus Stop in Yaba, Herbert Macaulay Road, has been ripped off on the Ikorodu Road bound carriageway.

A Correspondent of NAN who visited the site of the damaged footbridge on Sunday observed that the guard rails and walkways on the portion was totally removed.

NAN also saw the ripped steel carcasses laid aside on both sides of the highway leaving some steel support hanging loosely to the bridge frame.

However, the bridge was cordoned off on both sides with heavy logs of wood, big flower pots and red caution tapes to prevent usage.

Eyewitnesses, including military personnel at the Nigerian Army Marda Barracks, Yaba, told NAN that the bridge was ripped off in an accident that involved an articulated vehicle on Saturday.

Worshipers at St. Dominic Catholic Church, residents, and road users told NAN that the bridge was important and should be urgently replaced or repaired.

Mr. Amos Udoeno, a commercial tricycle operator who plies WAEC Junction to Sabo called for the rehabilitation of all the bridges on the axis.

Udoeno told NAN that parts of other footbridges on the axis had been ripped off, steps and the walkways allowed users to see vehicles underneath through the holes.

“A few people use this metal bridge here at WAEC Junction, maybe because they do not trust the strength. I am calling on the government to repair the bridge at Barrack Bus Stop, this one here and all the others,’’

Miss Moyo Salami, a shop attendant at the University of Lagos told NAN that “a tipper carrying too much load pulled off the bridge yesterday.”

“The bridge is already weak, if it was concrete, this cannot happen, so government should change this one and all the bridges on this Herbert Macaulay Road to concrete,’’

Some worshipers at the Saint Dominic Catholic Church appealed to the government to relocate and replace the damaged footbridge.

Mrs Deborah Shopotan, a member of the church, commended police from the Sabo Police Station whom, she said, arrested the articulated vehicle that damaged the bridge.

Shopotan, however, appealed for relocation and replacement of the footbridge to better serve residents and worshipers.

“There is no bus stop here in front of our church where they sited this damaged bridge, so, I am appealing to the government to construct another bridge with cement at the bus stop where vehicles drop people,”

Mrs Deborah Adeosun, another worshiper appealed to the government to consider including a Zebra Crossing sign on some sections of the highway to cater for people with a phobia for heights.

“No matter how good any pedestrian bridge is, I just cannot use it because I have fear for heights, the government should repair all the footbridges but they should help us with Zebra crossings here too,’’

Mrs. Bola Atinega, a visitor from Abuja to the church, Mrs Modupe Adigun, Mr Michael Udem and other worshipers appealed to the government to urgently replace the bridge to save lives.

Also, a retired civil servant, Mrs Priye Egi, appealed to the government to urgently fix the damaged bridge to protect the elderly on the axis.

“I just got down from Keke here and I am going to the barrack but I cannot cross the road because these median barriers are too high.

“I am 69 years old, I have served the government of this country faithfully and building good pedestrian bridges that favour old people is what I am begging them for,’’

Responding, the Federal Controller of Works in Lagos, Mr Adedamola Kuti, told NAN on the telephone that he was on assignment in Abuja but had directed his team of engineers to visit the site.

Kuti explained that the government had identified some footbridges for repairs on Apapa/Oshodi Expressway and would consider the ones on Herbert Macaulay Road alongside those ones.

“On Apapa/Oshodi Expressway, there are some footbridges we have already identified for repairs, we are going to work on them because there is already a contract on the highway.

“It will be an opportunity to check everything (the damaged bridge at Barracks Bus Stop and all the others on Herbert Macaulay Road),’’