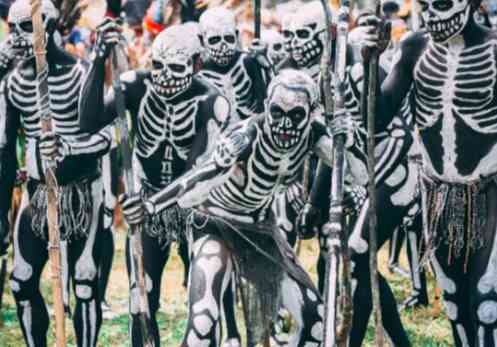 The Chimbu, an ethnic and linguistic group, live in the Chimbu, Koro and Wahgi valleys in the mountainous central highlands of Papua New Guinea.

They live in rugged mountain valleys between 1,400 and 2,400 meters above sea level, where the climate is temperate, with precipitation averaging between 250 and 320 centimeters per year.

Numbering about 180,000, they live in the 6,500 square kilometers of Simbu Province. Archaeological evidence at the Chimbu area proper and other highland areas “suggest occupation as long as 30,000 years ago, possibly with agriculture developing 8,000 years before the present.”

“Oral traditions place the origin of the Chimbu at Womkama in the Chimbu Valley, where a supernatural man chased away the husband of the original couple living in the area and fathered the ancestors of the current Chimbu tribal groups,” according to accounts.

The Chimbu first made contact with the western world in 1934 when an expedition by gold miner Michael Leahy and Australian patrol officer James Taylor passed through the area.

After World War II, Australia further exerted administrative control by recruiting local men as laborers for coastal plantations, with the introduction of coffee as a cash crop.

Elected local government Councils were also established, “followed by representation of the area in a territorial (later national) legislative body and by the creation of a provincial legislature.” 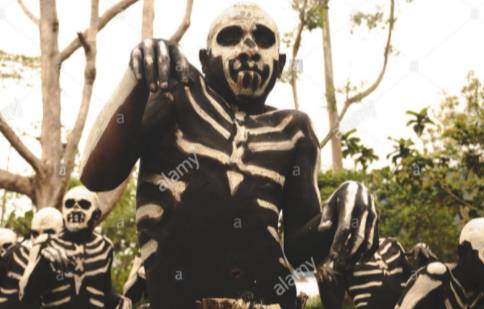 The Chimbu live traditional lives, looking after their pigs and crops, and most of their houses are oval or rectangular, with dirt floors, low thatched roofs, and walls woven from flattened reeds.

With pigs being “by far the most important domesticated animal” to the Chimbu, there is the pig ceremony (bugla ingu), the largest exchange ceremony at which hundreds or even thousands of pigs are slaughtered, cooked, and distributed to friends and affines.

Infants and children of both sexes are cared for primarily by their mothers and other sisters, however, by age 6 or 7, boys move in with their fathers if they live in a separate men’s house.

Prior to Christianity, the indigenous Chimbu religion had no organized priesthood or worship. The sun was seen as a major spirit of fertility. Reverence to ancestral spirits was key and placated through the sacrifice of pigs for the general welfare of the living.

YOU MAY ALSO LIKE  [Video] Lil Kesh – “Nkan Be” ft. Mayorkun

Over the years, the Chimbu have combined dance with body paint to intimidate enemies and have the psychological edge. Painting their bodies in white clay and ash, their enemies are intimated into believing that the Chimbu are not human and have some source of supernatural power.

Today, Chimbu/Bugamo dancers paint bones and skulls on their bodies to prepare for a ‘sing sing’ – a festival of culture, music and dance rather than for tribal war.

The Chimbu speak Kuman, one of the over 800 languages of Papua New Guinea.

The term “Chimbu” was given to the people by the Australian explorers in 1934 who heard the word “simbu”  (an expression of a pleasant surprise in Kuman language) yelled by the locals when they first met, the Guardian reported.