Gh One presenter Serwaa Amihere has sent social media into a frinzy after she shared a photo with the Minister of Information and Member of Parliament Hon. Kojo Oppong Nkrumah.

Readers would remember that sometime this year the Information Minister embarrassed Serwaa during an interview that got fans trolling her for some days.

We all pushed the matter aside and it looks like the two have patched up their difference making the slay queen turned presenter share a photo of themselves together.

Serwaa captioned the photo “My Best Friend” to which the minister reacted by saying “Bestie 1”. 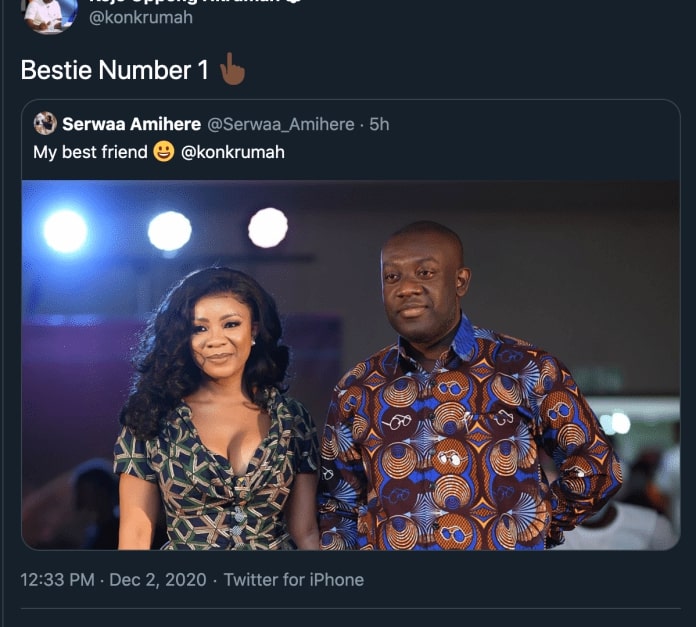 Though it’s not a bad thing for them to take a photo together some social media users have raised concerns as to the time the photo was taken.

From the photo shared on her timeline, netizens believe the photo was taken at night and they are asking what the two of them could be up to that night.

Read some of the comments below:

@DrizzyKidice: “My sister stop. He’s not your best friend. No bestie biaa for here. He’s married we beg u”

@Chrisbriacy: “You got the wrong best friend. A man who supports and defends corruption isn’t worth being your friend. Don’t let him fool you because you are too pretty to be dragged into that.”

@HumbleRachid: “She wants to eat him that’s why”

@KofiOwu62592468: “You will surely have been my couple of the year if you were together. You guys look so good together. Waow!”