A suicidal post by actress and model Moesha Boduong has raised concerns on social media.

Her post shared on her official Instagram page signals suspicion that the video vixen wants to end it all, thus take her life.

As of now, we can’t settle on anything that has compelled her to post such on Instagram.

Apparently, she might have been involved in a big mess that has narrowed her only option of ‘escaping’ the shame to killing herself.

Moesha Boduong’s suicidal post has got her fans, followers and celebrity friends worried.

What at all could be the problem? or is She just trying to steal the attention? Well, we live to see.

Her post reads; “Soon I shall become a memory… waiting to be erased” 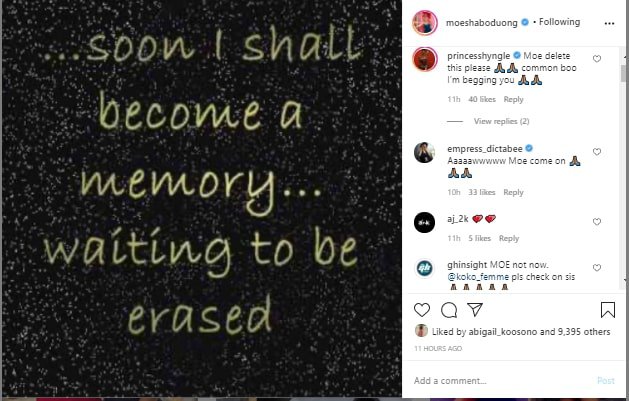 Moesha’s suicidal post on social media comes a day after Xandy Kamel’s. With her’s she sounded evidently troubled and was ready to give up, hence wanting to take her life.