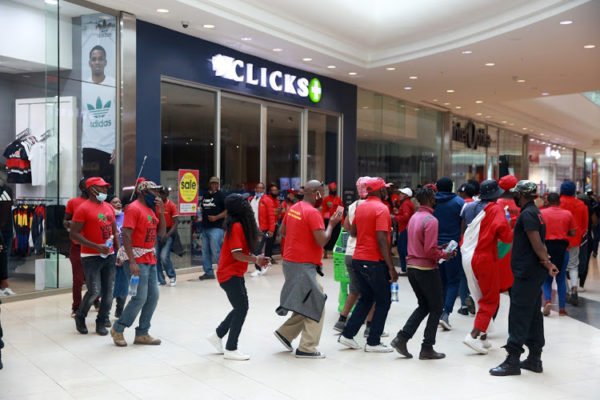 TRESemmé is now trending on Twitter following the Clicks’ announcement of removal of TRESemmé products from its shelves on Tuesday.

This is as a result of the controversial advert published on Clicks website by the Unilever brand which has caused a huge outrage and protests so far.

It portrayed black, natural hair as “dry and damaged” and blonde, straight hair as “fine and normal.”

Clicks have decided to replace the brand (TRESemmé) with local hair care products.

While some of the mass accepted the decision, especially the inclusion of local hair care products, others said the removal of the brand from Clicks shelves would be a step for a total ban of the brand.

However, TRESemmé has tendered an apology as regards the controversial and discriminatory advert. The company said an investigation will be done on the approval of the advert.

“We are very sorry the images used in a TRESemmé SA marketing campaign on the Clicks website promoted racist stereotypes about hair. The campaign set out to celebrate the beauty of all hair types and range of solutions that TRESemmé offers, but we got it wrong.”

YOU MAY ALSO LIKE  Xenophobia: Do You Agree?? What AU Should Do To South Africa – Atiku Abubakar

Catch a glimpse of the reactions following the removal of TRESemmé products:

Tresseme must be removed from all the shelves in South Africa not only clicks, any shop selling their products is racist by association.#tresemme

Clicks removing all Tresemme products from their shelves is a great way of apologizing. Honestly .

TRESemme OUT. Means smaller players IN. So. If you are in the beauty space. Get your proposals ready. Clicks is scouting..

So Clicks is pulling Tresseme products from it’s shelves and vowing to buy local products ?

The tide is turning

It’s all fine and well that Clicks is removing #tresemme products from their shelves, but there are many other retailers that will still stock it

YOU MAY ALSO LIKE  Danbaba Suntai's Health Causing Tension In Taraba

Twitter people saying Clicks dropping Tresemme products won’t affect Tresemme  is reason enough why not everyone should be allowed to have an opinion.I don’t care if Tresemme can still sell at other supermarkets, fact is losing Clicks will drop their sales which is good punishment

The post South Africans in support of product removal by TRESemmé appeared first on illuminaija.