The leader of Liberty Arena International Prophet Desmond Vidzro has announced on his social media handle that Bhim Nation President Stonebwoy born Livingstone Etse Satekla would win two(2) international awards that would get people talking for a long time.

Acording to his post, God opened his eyes to see this vision which was represented by a mountain on which Stonebwoy stood by great seas.

Prophet Vidzo went on to add that many people are wishing and have planned evil for the Dancehall artiste but with what he saw all these won’t come to pass.

He posted: “This is the word of the Lord to Livingstone Satekla “Stonebwoy” on 28/10/2020
The Lord opened my eyes and I saw him standing a very tall and huge mountain and I saw great seas surrounding the mountain. And the Lord told me this is an elevation that will changed a lot of things in his life and career. I saw two great awards given to him that got everybody talking and looking for him. It was very massive that people were surprised and couldn’t understand and the Lord said I am honoring him cos of what he has gone through. Presidents and Highly respected musicians from around the world begun to look for him. I saw a massive door for an award opened before him. The Lord said the enemy’s plans (Fatal accidents) and conspiracies against his life will not stand. I saw a shift and divine expansion in his career. Times and things are changing for him. There are more to be revealed……
2021,2022..???
It’s clear..
Ghana ?? wins.”

YOU MAY ALSO LIKE  If you love me, pray for me because I might sleep and never wake up – Cubana Chief Priest 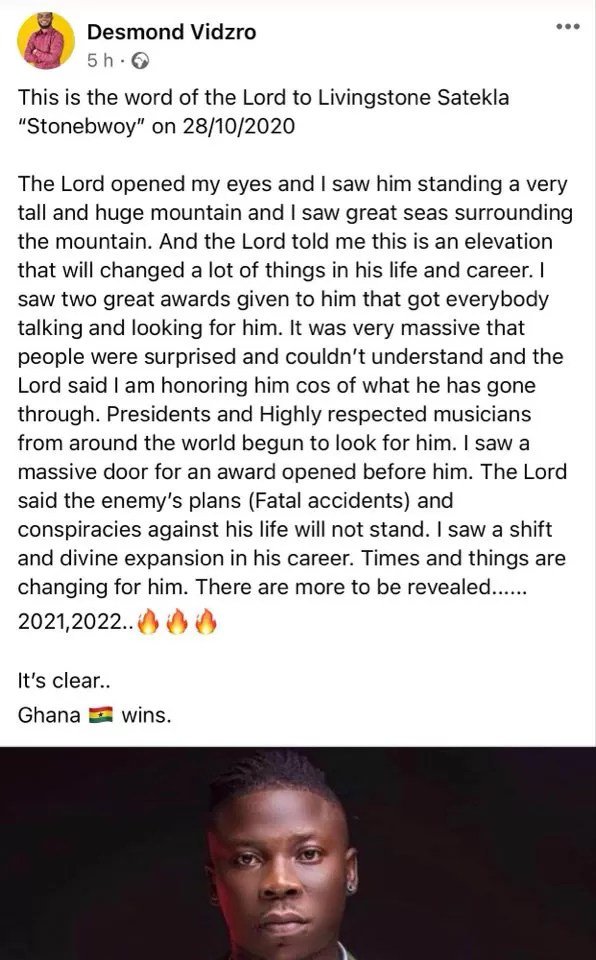 A source closer to him who spoke to us has revealed that Prophet Vidzro has already communicated his prophecy to Stonebwoy who has welcomed it in good faith.