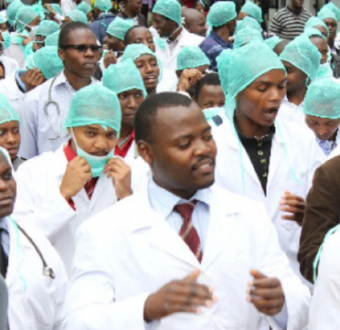 But it is the true reality of things. The Nigerian Medical Association (NMA) has revealed that only 42,000 doctors are available to 200 million Nigerians.

The NMA president Francis Faduyile made the revelation while speaking to ThisDay, adding that a total of 75,000 are registered, and the 33,000 missing have sought “greener pastures” abroad.

The situation is even more dire in rural areas, where, Faduyile said, there is only 1 doctor to 22,000 people. He said:

Nigeria is losing some of its most educated, talented and professional healthcare practitioners to countries such as Namibia, Senegal, Ghana, UK, South Africa and many others.

YOU MAY ALSO LIKE  I Wasn’t Dead, I’m Alive – Sky B Raises Alarm After Rumours Of Death Hit The Internet

This is because the government is not interested in giving adequate priority to health, low funding, no appropriate employment, low remuneration, lack of equipment to intervene and save lives, insecurity, bad roads, among other problems.

The United Kingdom employs, on the average, 12 Nigerian doctors every week. If Nigeria decides to graduate 3,000 doctors every year, without the doctors leaving this country, it will take us 25 years to meet the WHO estimate of one doctor to 600 persons.

YOU MAY ALSO LIKE  BBNaija: Laycon reveals he is not ready to talk about Erica again

The post The Nigerian Medical Association says only 42,000 Doctors are Available for 200 Million Nigerians appeared first on .