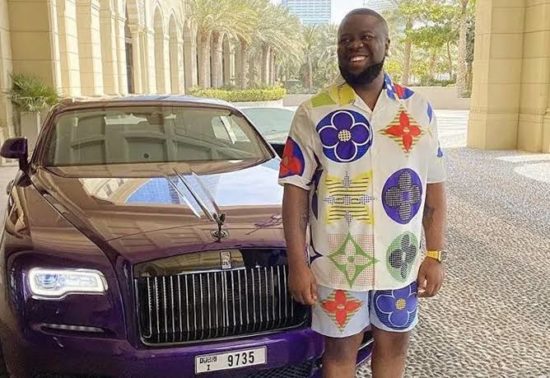 Alleged international fraudster, Ramon Abbas aka Ray Hushpuppi, once said his dream was to own two commercial motorcycles otherwise known as okada and a commercial bus popularly called danfo.

He said this during a live Instagram video with social media influencer, Abisoye Michael, aka Oyemyke in 2018.

Ironically, 13 luxury cars including two Rolls Royce, a Bentley, a Mercedes Benz G Wagon, Ferrari, Maybach, Bugatti and others worth $6.8m (N2.5bn) have been seized from Hushpuppi.

The alleged fraudster, who is in the United States facing charges of money laundering, fraud, and conspiracy, said he grew up in Oworonshoki, a Lagos community of mainly low and middle-income earners.

Oworonshoki is very close to the Third Mainland Bridge that links the highbrow Island to the mainland.

Hushpuppi said the reality on the island was in sharp contrast with that of Oworonshoki and he was determined to make it in life.

He stated that he also intended marrying an ‘amala girl’ who would own a small restaurant and they would live comfortably.

“When I started going to the island, I saw that cars we never dreamt of owning in our lives, they were using them to take children to school. I wrote a post that my dream in life before was to have two okadas and one danfo. It was the definition of success to me at one point in my life.

YOU MAY ALSO LIKE  247Music: Music Alert: Lyrical Prince - My Prayer || @lyricalprinz

“I was only dreaming of God giving me two okadas that would deliver daily payments to me every night then I would have one danfo and date the daughter of an amala seller which would be giving me steady food and she would have her own shop. It used to be our dream at one point in life.”

In the interview, Hushpuppi also opened up on his family.

He stated that he put his mum in one of the most expensive hotels in Dubai for several weeks and blessed her with the finest things of life.

“I am even closer to my dad than my mum. My mum is educated but my dad is not really educated. My mum schooled in London. I can bring my mum on the show to speak but my dad cannot really speak English but he is smart.

“The code I live by today is based on the advice of my dad. So, my dad has been my guide and backbone.”

Hushpuppi risks spending 20 years in a US federal prison if he is found guilty.

The post Throwback: My dream was to own two okadas, one danfo, says Hushpuppi appeared first on .