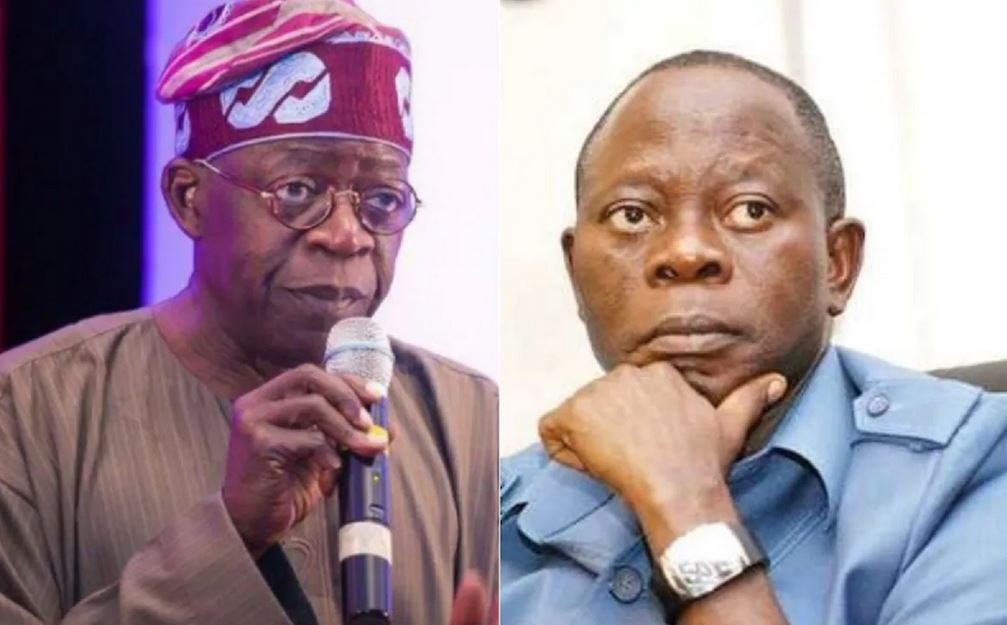 The September 19, 2020 Edo State governorship election has come and gone but the embers of the episodic event continue to glow in the glade of public discourse.

Although 14 parties fielded candidates for the poll, the result of the election showed it was a two-horse race between the Peoples Democratic Party and the All Progressives Congress.

The electoral umpire on Sunday subsequently declared Obaseki as the winner of the keenly contested election. INEC also on Tuesday presented certificates of return to the re-elected governor and his deputy, Philip Shaibu, at INEC office in Aduwawa, Benin City, the state capital.

President Muhammadu Buhari  has since congratulated Obaseki on his re-election. The APC national body has also conceded defeat and congratulated the opposition PDP and its candidate.

But while the congratulatory messages poured in for Obaseki and his party, nothing has been heard from the quarters of former National Chairman of the APC, Adams Oshiomhole; and former Lagos State Governor, Bola Tinubu, who were active political actors during the electioneering process that preceded the election.

Tinubu, in a televised broadcast a few weeks to the election, accused Obaseki of not being a democrat and how he had asked the people of Edo to reject him at the polls.

Tinubu, an APC chieftain, had also said Obaseki committed an impeachable offence in the heat of the crisis that rocked the Edo State House of Assembly weeks before the election.

On his part, Oshiomhole, who was Edo governor from 2008 to 2016, was instrumental to the emergence of Obaseki as his successor. The two, however, soon fell out and Obaseki, who was elected on APC platform in 2016, defected to the PDP on June 19, 2020, after being denied APC ticket owing to intra-party squabbles.

Oshiomhole during the build-up and politicking to the 2020 governorship election in the state had said he sold a bad product to the people of the state in 2016 when he campaigned for Obaseki.

Armed with a megaphone at a rally late July 2020, the former APC national chairman, who vigorously campaigned for Ize-Iyamu this time around, had gone on his knees and had asked his supporters to repeat a prayer after him.

He had said, “To those I sold the product that turned out to be fake, God you know I didn’t know he was fake. Only time shall tell who a man is.

“With our broom, we shall sweep him out. Together, we will bring your servant who is God-fearing, who will not repeat his mistakes and will complete the project of taking Edo to the next level. All these and many more we say in the mighty name of our Lord Jesus Christ.”

Meanwhile, despite the fact that the APC national body conceded defeat in the election, the party in the state rejected the outcome of the poll, alleging foul play and citing alleged “strong-arm tactics”.

Ize-Iyamu also said he was still “studying the results along with other party members”  and will announce his next move soon.

When contacted, Oshiomhole’s media aide, Victor Oshoke, told The PUNCH in a telephone interview on Tuesday evening that his principal has no comment or reaction to make on the outcome of the election.

He said, “The result has been announced and the party in the state is consulting; the position of the party will be released very soon. Oshiomhole does not have a personal opinion to make on the election now, he is waiting for the party’s position.”

On his part, Tinubu’s spokesperson, Tunde Rahman, told PUNCH in a telephone interview on Tuesday evening that his principal would speak “at the appropriate time”.

“Asiwaju has not spoken. At the appropriate time, he will speak on that election,” Rahman tersely responded when asked of his principal’s reaction to Saturday’s poll.

In the meantime, Obaseki on Tuesday called on Oshiomhole, Ize-Iyamu and other APC members to put their differences aside and work for the betterment of the state.