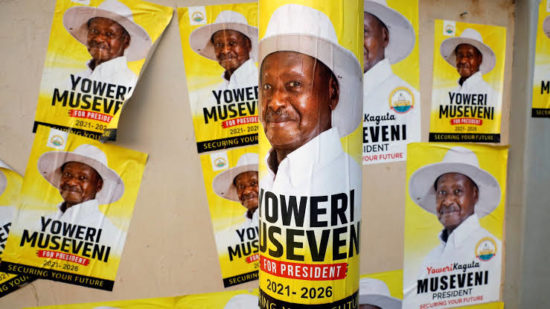 President Yoweri Kaguta Tibuhaburwa Museveni of the National Resistance Movement has been declared winner of the January 14 Presidential Election in Uganda.

The 76-year-old was declared winner of the polls after defeating ten other candidates including major challenger, Bobi Wine of the National Unity Platform.

With the declaration, Museveni is set to be sworn in on May 12 for his sixth term, which expires in 2026.

But his main challenger, Robert Kyagulanyi Ssentamu, 38 has rejected the results citing widespread voter fraud and heavy crackdown on his supporters, and further declaring himself as “President-Elect”.

BREAKING: EC declares Yoweri Kaguta Museveni winner of the Presidential elections with 5,851,037, 58.64% of the total votes