It appears the ‘Stonebwoy is ungrateful’ tag is gradually becoming an accepted fact among Ghanaians and music lovers in Ghana with the coming of another showbiz personality revealing deep betrayal secrets.

Saddick Assah aka Sleeky is a music promoter based in the Western Region of Ghana and he has recounted painful experience working with Stonebwoy.

According to Sleeky, he was right there when there was no Bhim Nation, no bloggers and sadly people were shy to move with Stonebwoy because of his disability.

He stood his grounds and projected Stonebwoy with all he got to push the amazing talent out there for Ghanaians to fall in love with him.

But sadly, Stonebwoy could not remember all the good things he did for him. He has snubbed him and blocked his number on top of it all.

Sleeky explains that it all started when he asked Stonebwoy to feature a young up and coming artist from Takoradi called AYA.

But Stonebwoy took offense and accused Sleeky of trying to control him. From that very moment, Stonebwoy blocked him and has never spoken to him again.

He did not remember all the good things that he did for him and he certainly does not remember the love that they shared.

Sleeky sharing an old photo he took with Stonebwoy years ago wrote on his Facebook page:

When there was no Bhim Nation, No blogger, most of you were shy to walk with him cos of his disability.

At this time he was doing features for 50ghc and even with that I have to lobby and convince people to get him featured.

He had no even phone, he picks pen and paper to take numbers. He wrote my number on paper and use people’s phones to call me when he wants to reach me.

I remember the last feature with old soldier 50ghc, even with that he wanted to share with me and I told him no. Someone Tag him.

I’m proud of him still. Stonebwoy doesn’t talk to me anymore because I wanted him to do a free feature for my Tadi guys AYA and he says I shouted at him, I want to control him. There noor he blocked me till date. 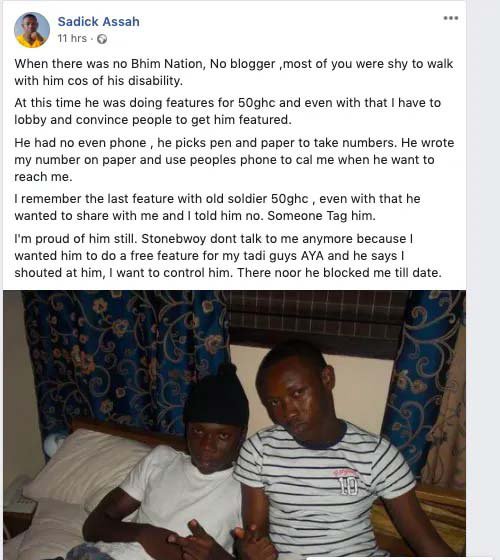 YOU MAY ALSO LIKE  #BBNaija: ”I Never Had Sex With Gedoni” Khafi Insists

This is not the first time Stonebwoy has been called for being ungrateful. There have been several instances with the likes of Beatz Dakey, Blakk Cedi, Samini, and many others telling their own sad stories from Stonebwoy.