On his Instagram page, the Archbishop’s last born son who goes by the pseudonym Dee Wills posted a video of himself playing a ludo game with his dad.

The prodigal son who probably made his return to Ghana from the US after the reopening of the Kotoka International Airport has since been spending quality time with his family.

After a tough couple of weeks filled with stories of his mental breakdown, his arrest, and rehabilitation, the young man has finally gotten back in his stride.

From the footage, he was seated face to face with his daddy going toe to toe at the game of ludo.

The Archbishop with his face mask seemed to be getting the best of his son as he was heard groaning in displeasure.

With the caption, “Spending quality time with the old man archbishopnick….. nothing better”, Daniel shared the moment.

Daniel Duncan Williams losing to his dad in a ludo game

Daniel from his recent posts and videos on social media is getting the best therapy he could get from hanging around family here in Ghana.

Again, Dee Wills in another post on Twitter stated, “My father has literally worked so hard to build an empire for me and my siblings, and I’m so grateful to the Lord for his sacrifice”. 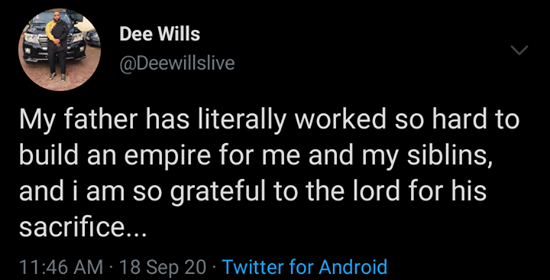 that although his son suffers from bipolar disorder, his love for him has never waned.