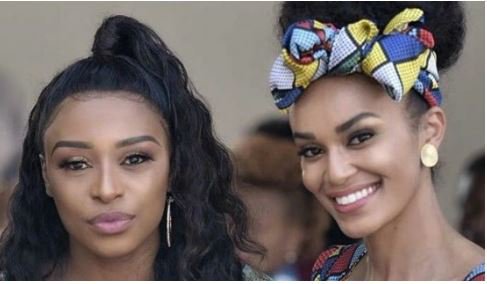 Somizi shared a teaser of his show, ‘Dinner At Somizi’s’ on social media indicating that two amazing personalities will feature in the next episode.

According to him, DJ Zinhle and Pearl Thusi are the next guests on his show and looking at things, it is a must watch.

In the teaser, Somizi asked DJ Zinhle if it becomes difficult to date her level.

In response to this, the DJ said she is still stupid in love and it looks like it might be really difficult for her.

“Definitely, I  think I am still stupid in love, I go in head first in the relationship,” she said.

YOU MAY ALSO LIKE  Shocking: Man hangs himself and his 11 months old daughter, on Facebook Live after suspecting his partner of cheating

On the other hand, Somizi asked Pearl what the most embarrassing thing she has ever done when she was intoxicated.

She replied by taking them back to what happened at her birthday party hosted at Taboo and she revealed she kissed someone.

Many of their fans can not just wait till Friday as they feel the coming episode is going to be the best of all.

The post Watch Teaser: DJ Zinhle and Pearl Thusi on “Dinner at Somizi’s” next episode appeared first on illuminaija.