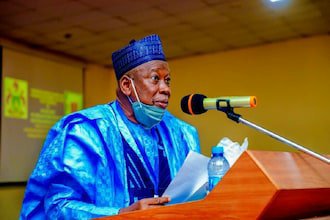 Governor Abdullahi Ganduje of Kano state has called for a ban on the movement of cattle from north to the southern part of the country and the middle belt.

The Kano state Governor who met with President Muhammadu Buhari in Daura, Katsina state alongside other All Progressives Congress (APC) governors, expressed hope of this stopping the clash between farmers and herders in the country.

Ganduje also disclosed that they are constructing a settlement for herders in a forest near Kano’s border with Katsina.

YOU MAY ALSO LIKE  Nigerian Actress, Uche Jumbo Calls Out New York Post For Claiming Beyonce Made Burna Boy Famous

“We are building a Ruga settlement in Samsosua forest, our border with Katsina and we have succeeded in curtailing the effect of banditry in that area.

The post We should abolish the transportation or trekking of herdsmen from the northern part of Nigeria to the south and middle belt – Governor Ganduje appeared first on .