MP for the Kwabre East District, Francisca Oteng Mensah’s wedding invitation, has been seen online after she said she was single in an interview.

Speaking to Lexis Bill, the 27-year-old lawmaker mentioned that she is single and would love nothing short of a Godfearing man to marry.

However, a wedding invitation that bears her name has been posted by one C.N Baidoo on Facebook, revealing that she is on her way to settling down real soon.

Scheduled for the 14th of February, Francisca will be walking down the aisle with a man named Kwadwo Adade Amponsah. This comes as a shock to many, with videos of her interview currently making waves on social media.

Baidoo’s post was captioned, ”A very big congratulations to Hon. Francisca Oteng Mensah, Member of Parliament, Kwabre East. The MP of the Constituency that has been giving the New Patriotic Party (NPP) the highest votes in the last three consecutive general elections. I wish you well Honorable.” 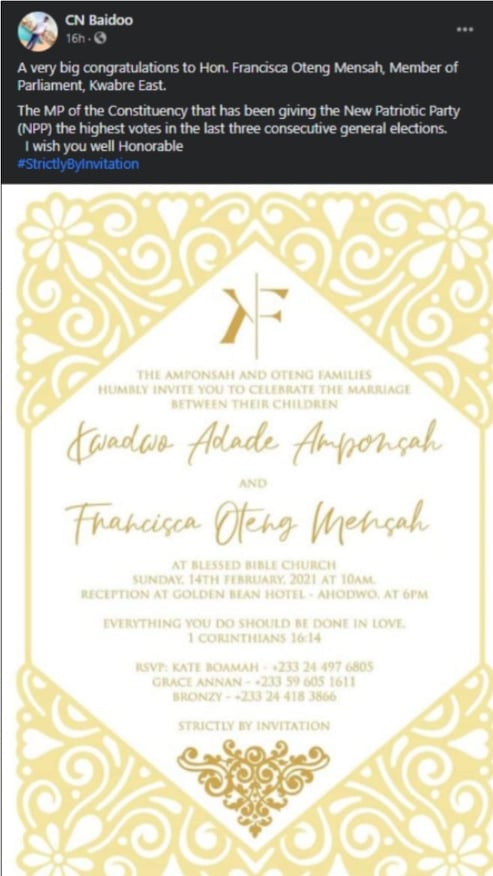 The question raised by many on social media is how the Member of Parliament could find a husband so soon.

The post Wedding invitation of Francisca Oteng Mensah, MP For Kwabre East pops up after she claimed to be single appeared first on illuminaija.