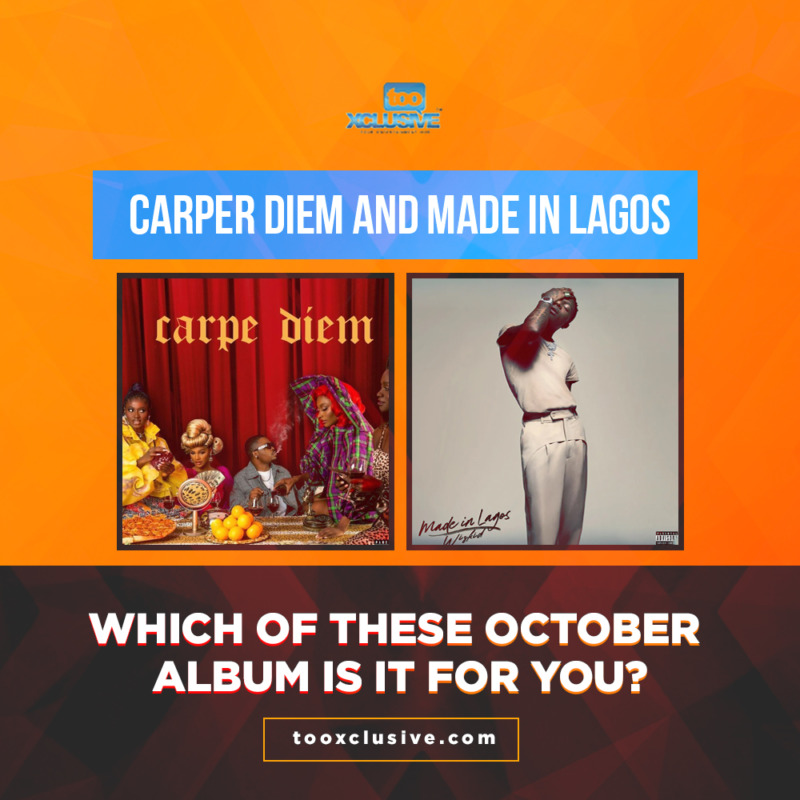 In the month of October, two music heavyweights, Wizkid and Olamide released banging albums titled “Made In Lagos” and “Carpe Diem” respectively. Olamide’s 12 track album “Carpe Diem” which is a Latin word used to express the idea that one should enjoy life while one can also serves as his 12th body of work.  The project boasts of an impressive lineup of artistes which include the likes of Bella Shmurda, Omah Lay, Phyno, Peruzzi, Bad Boy Timz, and his signee, Fireboy DML.

Wizkid’s “Made In Lagos”  is a direct reference to his Nigerian roots that lead straight to his Shitta (Small London), Surulere, Lagos beginnings, the city that made him who he is today. The tracklist also features the likes of Burna Boy, Skepta, Tems, Tay Iwar, Ella Mai, Damian Marley, and Projexx.

Both albums have received rave reviews from fans alongside massive airplay on streaming platforms worldwide. This has brought us to ask…. Which Album Are You Feeling The Most? Which has been on Repeat… ‘Carpe Diem‘ or ‘Made In Lagos‘? Kindly share with us in the comment section below

The post Which Oct. Album You Feeling The Most?… Olamide’s “Carpe Diem” Or Wizkid’s “Made In Lagos” appeared first on tooXclusive.