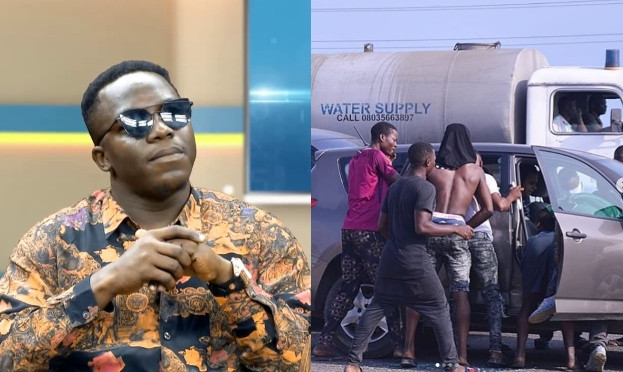 Mr. Hyenana berated Nigerians over the protest against South African xenophobic attacks which went sour in some parts of Lagos yesterday.

Recall we reported that the protest in some parts of Lagos was hijacked by some hoodlums who attacked and robbed innocent Nigerians and foreigners.

Reacting to the sad incident, Mr Hyenena lashed out at Nigerians that looted stores owned by fellow Nigerians.

He also revealed that some of the hoodlums attacked some white men riding in an SUV in Jakande area of Lagos state, and also forcefully took phones belonging to innocent Nigerians including a member of his production crew.

YOU MAY ALSO LIKE  Jigawa Hisbah Arrests 48 For Prostitution

“I saw this hoodlum beating the 3 white Guyz in this SUV in Jakande, they forcely took PHONES from several people (One of My production crew included)….

This is Pure Stupidity, this Bastard Illiterates don’t even know what Xenophobia Mean. PLS Be careful out there Guyz. Note: This is Exactly what the Devil wants, Lets Pray for Gods Intervention.

Remember (Wisdom is Profitable to Direct)”

“Nigerians Are Worse than South Africans On a lowkey… Now we beginning to Kill eachOther, Rob EachOther, Molest women on the Road,… Una hear say Southy People they harm themselves? Or them dey VANDALIZE them Citizens Store? REMEBER SHOPRITE NA JUST ONE STORE, All Other Stores are owned by Nigerians. THEY Just vandalized a friends Store in Sangotedo shoprite.. NIGERIANS ARE WE MAAAAAD” he added.