Actor Goriola Hassan, who was recently installed as the King of Uba land, Imobi Kingdom, Ogun State has now shed light on his new status and how he was chosen. 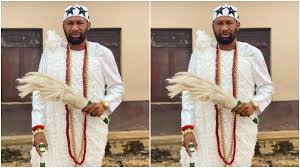 I did not spend money. My parents, maternal and paternal, were royalty.

It was actually after I came back from the United States of America that the people came to me and asked me to become king.

YOU MAY ALSO LIKE  Afarikorodo – “God No Go Shame Us” ft. Qdot

I did not have to spend money. Rather, it is the town that is spending money.”

When asked if he will still continue acting with his new status, Goriola Hassan said

No, I would not be able to do that. However, I have about nine unreleased movies and I plan to put them out as time goes on.

YOU MAY ALSO LIKE  VIDEO: Yemi Alade – CIA (Criminal In Agbada) Live Session