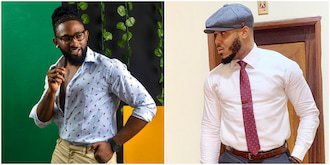 Popular media personality, Uti Nwachukwu, has joined several fans who reacted to the eviction of Big Brother Naija (BBNaija) housemate, Ozo, from the fifth season of the reality show.

Uti penned a sweet and touching note to the BBNaija star on Instagram in which he commended him for being himself while in the house.

According to Uti, regardless of all the social media trolling as it regards Ozo’s feelings for fellow housemate, Nengi, he is still a real man.

He advised Ozo to never let anyone shame him simply because he was bold enough to show his emotions.

“Competition and all Jokes aside … YOU ARE A REAL MAN!!! Don’t let NOBODY!!! Try to shame you for wearing your emotions on your sleeves and Loving with reckless Abandon”
In a different portion of the note, Uti described Ozo as the man a lot of other men want to become but cannot do so because of society’s expectations of a man.

According to him, his feelings towards Nengi were indeed reciprocated even though it may not be exactly as he wanted it.

Uti went on to remind Ozo that he has been in the BBNaija house in the past and knows what it feels like to find love in such a setting.

“I’ve been in that house and I know what it’s like to find someone that you feel strongly for. Hence the desire to always want to be around them.”

The post You are a real man, Uti says as he pens lovely note to evicted BBNaija housemate Ozo appeared first on .