A young man has taken to social media to complain about how he is being sexually abused by her stepmother in their house.

According to the boy who chose to stay anonymous, he lives in the same house with his father and stepmother but things started changing when his stepmother began to demand other services from him.

He claims that the woman is a sex maniac and she sleeps with him any chance she gets when the husband is not around.

In fact, this young man claims the stepmother can go as many as 4 rounds each day 5 days in the week when his father goes to work.

Although this sounds like sexual abuse, he says he enjoys it and the woman buys him all the things he needs as a young man.

However, he thinks it’s not right and he needs advice on what to about the situation he finds himself in.

YOU MAY ALSO LIKE  [EP] Reminisce – “Vibes & Insha Allah”

The story was shared with Naba Aba Anamoah, the veteran media personality who is currently running a program dubbed #MyDMDiaries on her Instagram page. 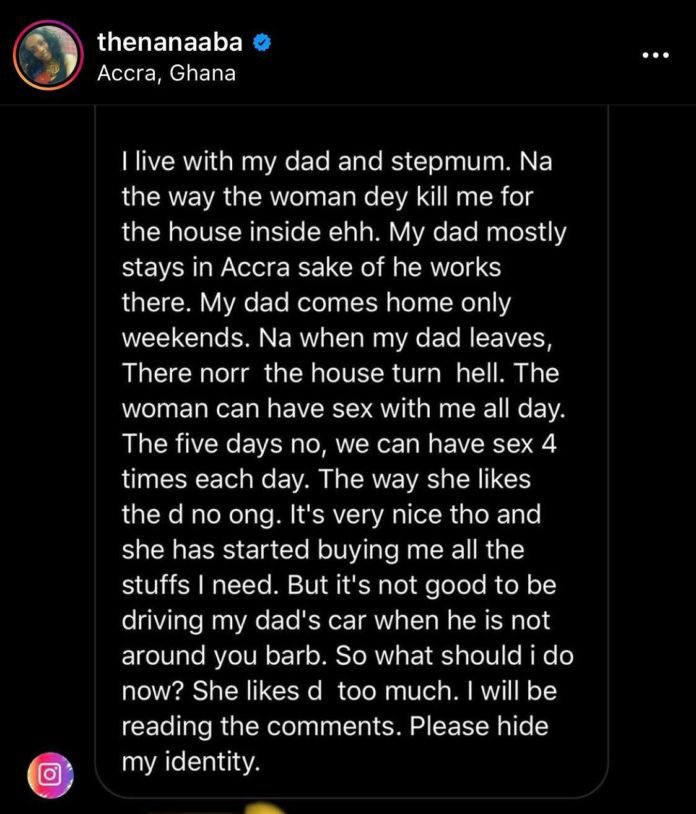 This is the second season of #mydmdiaries from Nana Aba and already netizens are hooked to the show being run.

It’s an opportunity given to everyone to share their stories with the media personality in her dm. She also shares the story on her timeline anonymously for netizens to give their advice to the person.

Some of the comments on this particular story read:

@magnetic_em wrote: Bra… but you said it’s nice??carry on … someone will do same to you

@ag.jonathan.hex said: Please leave the house and start a life free of vices

@jb.michael also said: Karma will serve this guy a nice dish. One day, the chicken will come home to roost.

Things are going on in people’s houses oo lol

YOU MAY ALSO LIKE  Doctor who fled UK after accusing Twitter influencer Dr Olufunmilayo of rape, arraigned in Lagos

SURPRISING – Despite Having License To Own Guns, Iceland Have Recorded No Gun Murder Since 2007, See Why